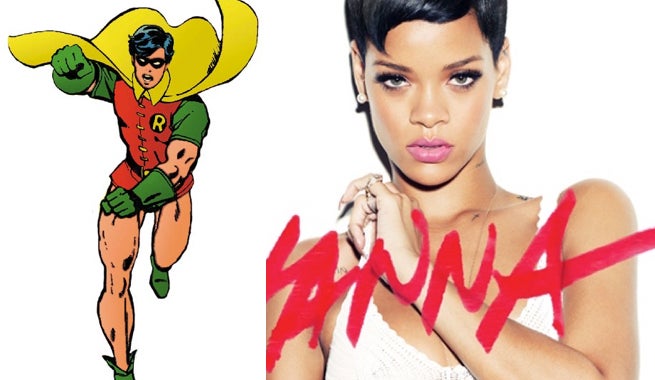 While DC Comics has passed the mantle of Robin to many a folk both real and fictitious, they're cutting the cape short with music artist Rihanna.

After Rihanna (whose real name is Robyn Rihanna Fenty) filed a trademark application for the name "Robyn", which would be used for a fashion and cosmetics franchise, and "on-line non-downloadable general features magazines," in 2014, DC is now attempting to stop the singer from doing so.

As DC sees it, "Robyn" skews too closely to their "Robin," who is Batman's sidekick and profitable franchise in his own right. As DC argued in their official opposition, "Robyn" could "deceive" consumers into thinking that Rihanna's product may have ties to The Boy Wonder. Thinking that "Robyn" could ambiguate one of their oldest characters, DC also claimed that "Robyn"is jus trying to piggyback on Robin's iconic status.

Rihanna's camp has forty to officially respond to DC's opposition. DC and Rihanna can't reach an agreement, the two will take their battle to the Trademark Office, who will officially determine if "Robyn" is dissimilar enough from "Robin."

What do you think, readers? Is Rihanna's "Robyn" to similar to DC Comics'? Sound off in the comments below.

Master Chief Fans Are Expecting Him to Be the Next Super Smash Bros. Ultimate Character