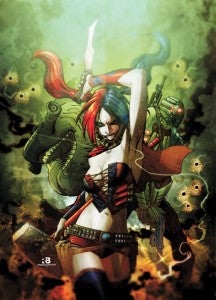 The comic book natives seem restless, and once again people are taking to Facebook to air their disagreement with a change in direction. A Facebook event, found here, has been orchestrated to bring together disenchanted fans of DC comics, who are not only planning on rebooting the entire line of comics they produce, but many costume and design changes to long-beloved characters as well.

According to the wall for the event, which now has over 100 people saying they will attend, the planned walk/march is meant to be an en mass demonstration at one of the biggest pop culture formats in the world, the San Diego Comic Con. We have certainly covered many of the costume changes to the DC lineup here at this site, but it seems now that fans of characters getting a drastic makeover, such as villain Harley Quinn, are planning on airing their displeasure while several high ranking DC personnel are present. What are your thoughts on this protest?