A couple more "Flashpoint" mini-series issues are in the bag, and three Robins team up to take down some scum in the DC Universe this week. [caption id="attachment_6493" align="alignright" width="194" caption="Batman and Robin #25"] 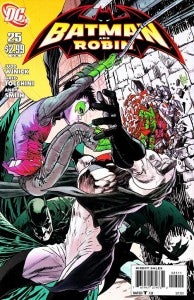 [/caption] Judd Winick finishes up his "The Streets Run Red" arc with Batman and Robin #25. I have a love-dislike relationship with Winick's books. This arc started off promising and ends with me feeling like there was so much wasted potential in this story. I like when the Robins are all within the same vicinity of each other. If Winick had found some way to insert Tim into this issue, I would have flipped my lid even more. With Jason as the black-sheep of the family, he comes off as a bigger jerk than Damian has ever been. When the three are actually on the same page, they're untouchable. I'm never really sure if Sasha's kidnappers were actually the League of Assassins in the end or not. Winick writes his baby as an annoying neglected adolescent this time around as opposed to the cunning killer we've gotten used to. Every now and then, Red Hood of old will shine through, mostly towards the end of the issue. I like where Morrison was taking the character. It seems like Winick took him back a couple of steps. With Jason slated to be written by veteran Scott Lobdell, it'll be nice to see him working in a team dynamic. He may be the most polarizing character in the DC Universe, but I can see tons of potential for him. Once again, DC went with Greg Tocchini for art on this issue, and it was a huge mistake. I was severely put off by his art in the last issue and it didn't get any better this time around. I like that he tries to add some expression to Batman and Robin, but they look like bad Invader Zim rejects. If I had just decided to pick this book up on a whim, I wouldn't have bought it based on the first two pages alone. That is not an appealing look for buyers. There's also something about Red Hood's helmet that really bothers me. Andy Smith's four pages at the end look way better and the characters are way more appealing. I wish he had just done the whole issue. It's extremely disappointing that Guillem March couldn't finish this arc, as his pages in #23 and his covers were fantastic. I'm sure Tocchini's style could work well with something a little more abstract and exotic, and his other work looks much better. It just wasn't right for this run. All in all, these issues felt rushed. Of course it was supposed to be a fill-in story, but I was expecting so much more based off the excellent #23. [caption id="attachment_6496" align="alignleft" width="194" caption="Abin Sur: The Green Lantern #2"] 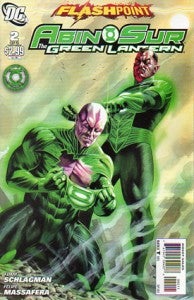 [/caption] Adam Schlagman's Abin Sur: The Green Lantern #2 starts off with a flashback that adds more weight to Abin and Sinestro's friendship and family ties. It then transitions to the end of Schlagman's Hal Jordan #1 and basically tells us the next scene of that book. Cyborg recruits Abin to his cause, and the guardians are upset that his primary concern is not finding the white entity. Sinestro shows up on Earth to reveal the "Flashpoint Prophecy" to Abin. His concerns are voiced as the issue closes with a bit of action, and the promise of an epic conclusion. Whether or not it can deliver, I'm not sure. The first two issues have been a ton of buildup with little pay-off. The art is nice, but all over the place. Felipe Massafera, Robson Rocha, and Joe Prado do their best to keep things looking consistent, but when young Sinestro looks older than his present day counterpart, you can tell things are off. The book hops from hyper-detailed, to looking like it was rendered in photoshop, which could honestly be the coloring, as it switches from dark to bright in a matter of a page turn. I also dislike the use of the movie-esque costumes. The costumes, for me, were one of the big weak spots of the movie. This has been one of the more enjoyable series in this event, and it seems like it could be an integral piece to how the DC Universe looks afterward, but they probably won't allow it to carry that much weight outside of the main series. Overall, I'd recommend giving this one a chance if you picked up the first issue and were unimpressed. If you didn't bother with it, pick them both up. [caption id="attachment_6497" align="alignright" width="196" caption="Batman Knight of Vengeance #2"] 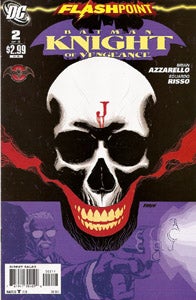 [/caption] Finally, Brian Azzarello and Eduardo Risso drag us down into the dark depths of "Flashpoint" in the crown jewel of the event. Batman Knight of Vengeance #2 deals hand after hand of awesome. Batman is recovering from his encounter with Killer Croc, leaving Gordon on his own for a hot minute as he tries to track down the Dent's kids. The Orcale of "Flashpoint" is revealed, and it was an unexpected moment, leaving the reader wondering about her story. The issue's climax is incredibly tense and gruesome, and the Joker reveal was a great surprise as I almost had it figured out, but was off by just a little bit. I'm not at all bothered that this isn't really contributing to the overall story of "Flashpoint" and is just working as a stand-alone story for this version of Batman. Eduardo Risso's work, while not traditionally pretty, is awesome and fits the noir-ish feel of the story perfectly. His layouts throughout the issue are great as well. The fact that he could draw the last few pages of this issue and get away with it show the level of trust between this team and DC and their love for this series. Of all the "Flashpoint" minis, this is hands down the best and most consistent so far. If DC was smart, they'd have this as an ongoing after the re-launch, ignoring the fact that it was connected to what is presumably responsible for the launch. Thomas Wayne makes for a Batman who is intense and scary, and follows up on it. He doesn't just scare people into fearing him; he makes sure they're scared of him for life. His willingness to kill sets him apart from his regular counterpart, providing story possibilities we're not used to with the hero. Azzarello has a gem on his hands, and I'm not sure where he'll take us to conclude this story, but it's my most anticipated book for the future.