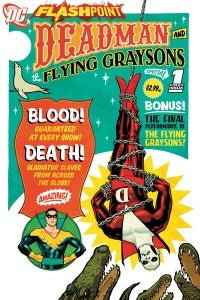 Deadman and the Flying Graysons #1 is written by JT Krull with art by Mikel Janin, and the cover is by Cliff Chiang and Jared Fletcher. Flashpoint has taken the DC Universe we know and love and turned it into a shell of itself. This "House of M"-esque turn of events has given us a Thomas Wayne Batman, a war between Atlantis and the Amazons, and even a pirate Deathstroke. Deadman and the Flying Graysons opens with Haley's Circus in Austria as Europe is being torn apart by the Atlanteans and Amazons. Avoiding war-zones, the circus runs off various acts such as King Shark, a fortune telling Dr. Fate, and the high flying antics of the title characters. Boston Brand, aka Deadman, is a vain, daredevil of a loner that contrasts against the family dynamic of the Flying Graysons. He comes in contact with Kent Nelson, who seems to privy to the fact that things aren't right in the world, and has a vision of a dead Dick Grayson. Naturally his reaction is to try and entice Dick into performing without a net. The Amazons are seeking out the Helm of Nabu and seem to be prepared to go to any lengths to obtain it. All in all, it seems like the issue is all set up, with the ending leaving the reader in anticipation for some much needed action. The art is fairly nice with a murky color pallete that did not bother me too much. Compared to the brightness of the cover (and even the massive JLA/Subway ad in the middle of the book), however, it leaves something to be desired. I'm also a little bit baffled as to why Dick Grayson looks almost as old as his parents, and this was something that bothered me the whole time while reading. The cover is the real standout part of this book. It's a mix between a classic comic and a circus poster which gives the feeling of danger and adventure. That is something this issue is seriously lacking until the end. The only bad thing is I could also do without the Green Lantern movie banner at the top. It's very distracting. I would advise picking up the book for the cover alone, but this one is looking like it could probably just be a wait for the trade sort of deal. So unless you're obsessively collecting everything to do with Flashpoint, I'd say pass on this.

Deadman And The Flying Graysons #1 Review