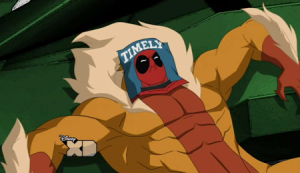 Marvel and Disney XD have released a clip from Sunday's upcoming episode of Ultimate Spider-Man, featuring the titular hero coming face-to-face with...Deadpool! Fresh off a hot-selling video game, the Merc With a Mouth appears on the Sunday morning cartoon and...well, you can just check it out below.

Ultimate Heroes. Ultimate Villains. Ultimate Responsibility. Spider-Man must lead his team of teen heroes against the greatest assembly of super villains the world has ever seen! Season Two of the hit series ULTIMATE SPIDER-MAN continues as Spider-Man comes face to face with the Marvel Universe's most unhinged hero – Deadpool! Spider-Man envies Deadpool's free-spirited life, but that all may change after one day in Deadpool's madcap world! Don't miss the next amazing episode of ULTIMATE SPIDER-MAN debuts this Sunday at 11a/10c inside Marvel Universe on Disney XD.

WWE Raw: Big E Retains the WWE Championship Inside a Steel Cage, Gets a New Challenger