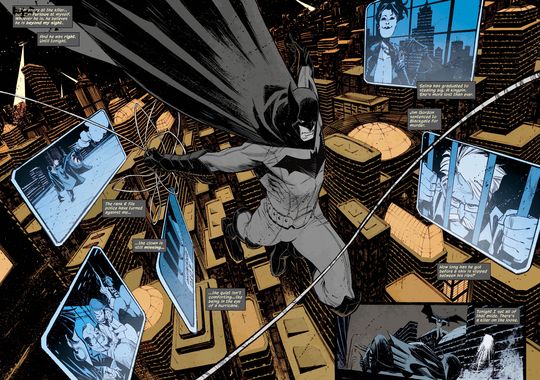 The issue was originally solicited as written by Snyder and featuring art by Scalera, but USA Today spoke with Duggan about taking on the fill-in gig and the excitement of writing a real, canonical Batman issue.

"It doesn't feel real," Duggan said. "The first time I wrote the word Batman into a script — and it wasn't referencing Batman in something else — was a real treat. There were a lot of things that gave me goosebumps."

Since the launch of the New 52, with Snyder being credited on all 34 of the previous issues (#1-33 and #0). Becky Cloonan has previously filled in on art. Snyder will still have a co-writer credit on the issue, presumably because Duggan used his originally-solicited plot (although that is not made explicit in the interview).

The issue introduces a new character called The Meek introduced by Duggan, who says, "it doesn't matter how many days he has to go without sleep, the killer is going to be caught. There is a way that Batman can deliver this justice, and it's not a physical rebuke either. It's a fun character moment."

"The joy of making these comics is we get to leave some other toys in the toy box," he added of creating the new villain.

Batman #34 is on sale Wednesday.