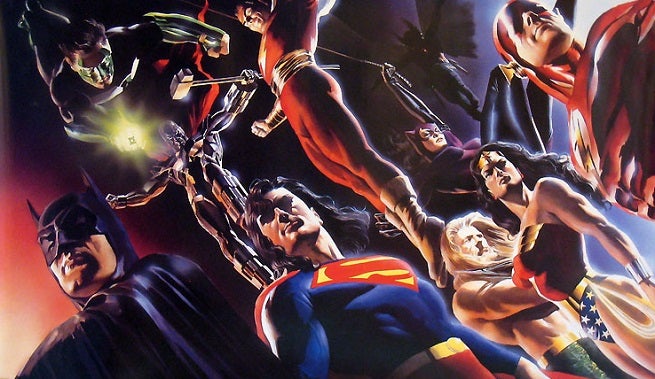 Just the phrase, in the comics community, can invoke scorn and derision -- sometimes from thoughtful people.

Me? I was born in 1980 and came into my own as a comic book reader in the early '90s. There were a great deal of comics written back then that have brought me joy over the years, and while that's really subjective, I recently started to wonder: are the comics of the '90s really as bad as their reputation?

Well, some of them are.

But not all. In fact, I'd argue not most. And as we'll explore over the coming weeks and months, there's a case to be made that the 1990s gave more than they took away.

This is Defending the '90s, a new column that will run every other Wednesday and touch on topics, comics and personalities who are, frankly, unfairly maligned.

Now, it would be absurd to claim that the entire decade was without fault. And, yes, we've got plans to take on some of the rubbish produced during the '90s within the context of this column...but the fact of the matter is, I'm a reader who has spent thousands of dollars over the last 20-odd years in the comics industry...and I was gone until The Death of Superman drew me back in.

I'm not alone. Veteran Superman writer Dan Jurgens has said in the past that he hasn't been to a convention in years where a fan hasn't told him the same thing. There are a great many readers who came to comics -- or came back to comics -- in the 1990s and who remain here today.

In this first installment, we'll just look at a few examples, glancing over the details. Over the next several weeks, we'll take a more in-depth look at each of these examples and more...and hopefully help some folks reconsider their opinions on an entire decade's creative output. 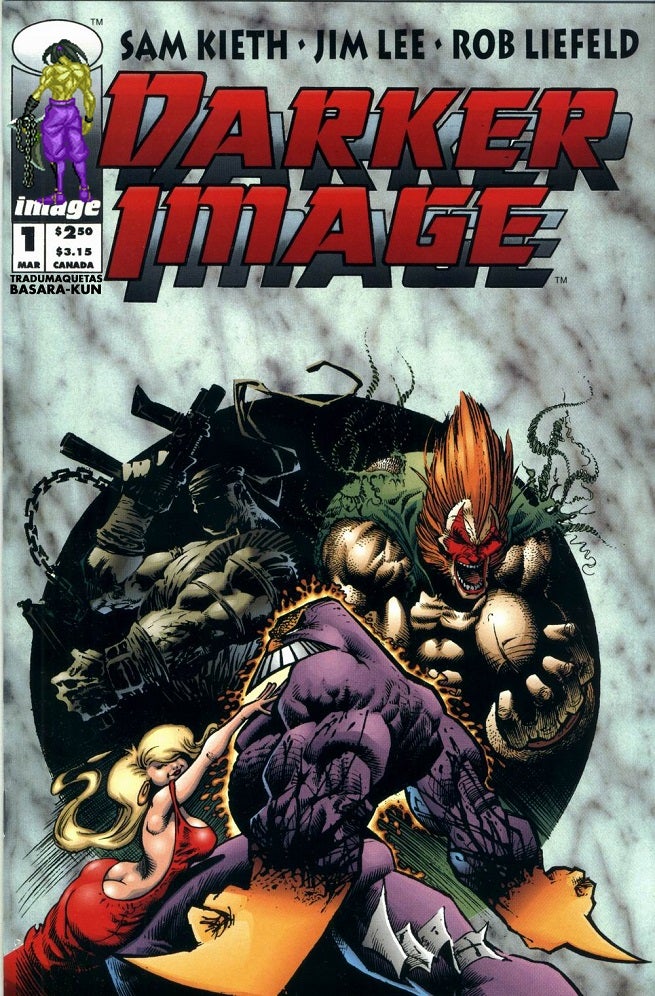 When seven of the hottest creators in comics broke away from Marvel Comics to found their own company in 1990, the economic impact on the industry was massive. The books all sold massive numbers, far exceeding any reasonable expectations for comics published outside of the Big Two.

And while many of those comics are easily dismissed in hindsight as deeply flawed cash-grabs, it wasn't long before Image was publishing some of the best comics in the industry -- a trend that continues to today. And if you think the foundation for the publisher that brings you Saga and Sex Criminals would have been strong without Spawn, Youngblood and Savage Dragon selling half a million copies each of their early issues, you're sorely mistaken.

Everybody hated Wizard. Creators, publishers, fans...everyone can collectively agree that nothing good came from that greedy, shabby rag. 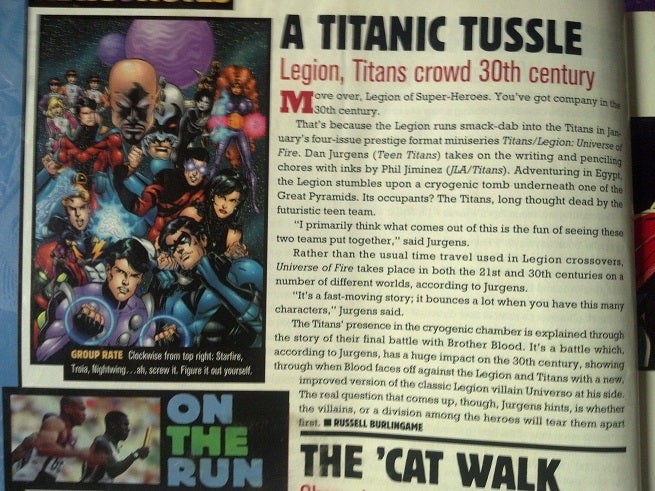 Well, my career in the comics industry started in 1999 as an unpaid intern at Wizard: The Comics Magazine. You can see one of my earliest published stories at right.

During that time, I worked with Robot Chicken co-creator Matt Senreich and producer Tom Root, The Walking Dead letterer Rus Wooton, DC Comics editors Mike Cotton and Brian Cunningham, Hero Initiative President Jim McLauchlin and probably some more I'm not remembering. Reading With Pictures founder Josh Elder worked there either shortly before or shortly after I did, too.

So...yeah. Wizard may have had its issues, but in addition to bringing comics to audiences who might not ordinarily see them (remember this magazine on the endcap at your local Blockbuster Video?), it gave the industry a number of figures who have given back quite a bit. 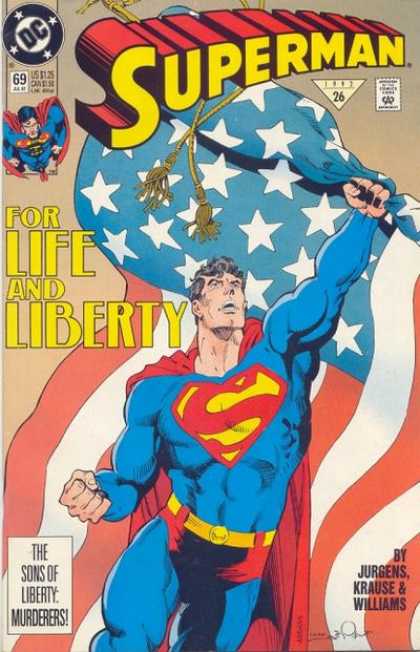 There are plenty of people -- including some regular commentors on this site -- who despise the Byrne era and those that followed it, for a number of reasons. That's fair; I don't particularly care for some iterations of Superman myself. But for many of us, the Superman titles in the '90s were something very special.

Following the events of Crisis on Infinite Earths, Superman was truly the Last Son of Krypton, stripped of companions like Supergirl and Krypto and even of his years-long history as Superboy. His powers were scaled back and his supporting cast was beefed up and changed. Ma and Pa Kent, still alive, joined the modern-day supporting cast (presumably to open up storytelling opportunities that were closed with those characters by removing the Superboy tales), the cast was diversified, new characters created and relationships like the ones with Lois Lane and Jimmy Olsen were modified somewhat.

from 1991 through the rest of the decade, the Superman titles were effectively a weekly comic, often with a central narrative but always with each individual creative team building around that narrative to tell stories that appealed to them directly. Most of the decade (not just for Superman, but in so many ways) revolved around 1992's The Death of Superman and the stories and events that sprang out of that...but more on that another day. 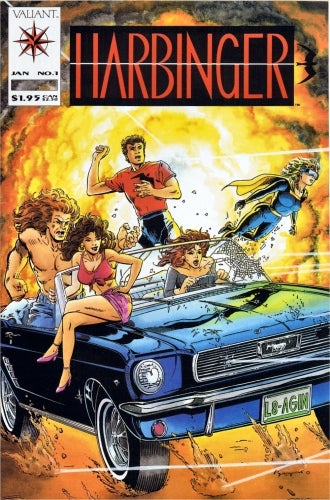 I won't lie; I was never a huge fan of Valiant in the '90s. The few that I owned, were either because I met the artist at a convention (Bart Sears came from my geographical area) or because they were being given away for free when I worked at Wizard magazine in 1999 (there were always free comics in the breakroom at Wizard when I was there, because one of the staffers was cleaning out the library and trying to get it manageable).

Nowadays, though? They're probably pound for pound the most reliably great mainstream comics publisher.

There are other companies who might have more great titles, but in any given month, Valiant just doesn't publish a bad comic. Even the ones that don't appeal to me as a reader because they aren't the type of material I generally enjoy reading, I can look at them and acknowledge that they're technically quite good.

The alternate Supermen, the Image revolution and other, similar concepts that gave fans new, headlining heroes who actually moved units led the companies to a great sense of experimentation.

Overall, the number of original characters created in the comics industry since the '80s who have stuck around and made a serious impact is relatively small. In recent years, it seems it's rarely even tried, with most new characters simply being slotted into the roles of older heroes.

And, yeah, that happened plenty in the '90s, from big names like Batman and Spider-Man to smaller ones like (not a Doctor) Fate.

That said, we got a lot of tweaking the formula in the '90s, a lot of creating new characters or totally revamping the old ones. Often it was market-driven...hoping to drive speculator sales or just find that magic combination that would take off with a new Kyle Rayner-type character.

They also let a lot of crazy concepts like Grant Morrison's The Invisibles and Garth Ennis's Preacher find their way into the mainstream. Following the success of Sandman and Hellblazer in the late '80s, the Vertigo of the '90s, for instance, became a wonderland that turned out not only some of the best comics of the decade, but of all time. 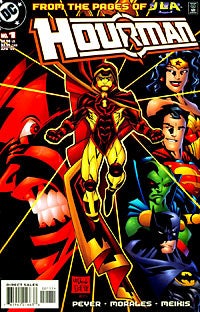 Not only did Elseworlds and What If...? provide us with a steady flow of alternate-reality stories, but the iconography of our favorite superheroes were constantly being examined through shifted or broken lenses in the '90s.

The Age of Apocalypse, for instance, used an alternate reality to reinvent the X-Men Universe in a way that resonates with readers to this day.

Beyond those kinds of alternate takes, though, you had some that tied closely into the "experimentation" discussed above. Guy Gardner: Warrior may take a lot of flak as a concept, but it was a Hail Mary pass: a bold and strange choice made in the hopes of maintaining the longevity of a property whose entire core concept was being stripped away by editorial mandate. And, honestly? The comic itself was actually very entertaining.

There were as many misses as hits, we'll grant you, but the fact that most of Sandman and all of Starman took place during the '90s, as well as titles like Tom Peyer's Hourman, should convince you that these are more -- and more significant -- than just "What-Ifs."

TV and the Movies

The '90s not only saw the start of some major film franchises going into production at the tail end, but the Batman series (for better or worse) dominated the movie theaters.

We got TV series for Teenage Mutant Ninja Turtles, Savage Dragon and Swamp Thing, proving that you didn't need to be mainstream (or particularly attractive) to make the jump from page to screen...and of course, we got things like Batman: The Animated Series and the beloved X-Men cartoons.

The rise of the direct market

This one is both good and bad, and we'll get into that when we write more about it -- but the massive demand for comics in the '90s helped the comics specialty market explode and even after the bottom fell out of the comics market in the mid-'90s, direct market comic shops helped keep the ailing industry afloat.

Nowadays, of course, physical comics are pretty much only available in the direct market. Unless you want...

The rise of the bookstore market and collected edition/trade paperbacks was inevitable following the success of Watchmen, The Dark Knight Returns and Sandman...but it wasn't until after The Death of Superman and similar events that the collected edition market truly exploded.

In the early '90s, it was still pretty much impossible to get caught up on your favorite titles via collected editions...but by the time Grant Morrison and Howard Porter were burning up sales charts on JLA, that was the new normal...and has been ever since. 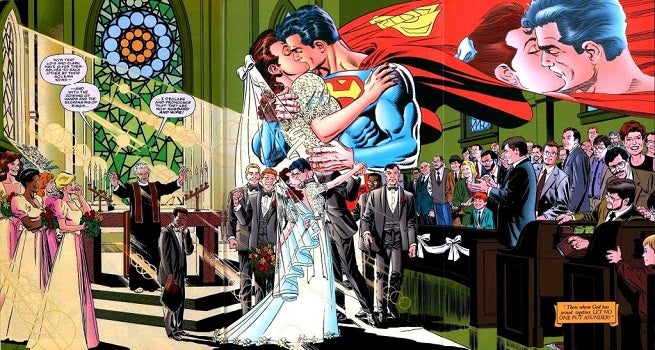 This is the big one. In the '90s, it always felt like something was happening...and it always seemed to be building and building.

Some will argue that such an emphasis on plot happened at the price of sacrificing character, that spectacle overwhelmed quality and that the feeling of something always happening is what gave us the event-driven culture that frustrates many fans and critics today. There are kernels of truth in that, but ultimately, the feel of the average comic in the 1990s is wildly different than today's -- and in many cases, far more entertaining.

The fact that there was so much forward momentum also propelled stories forward. Characters aged, died, married, had kids, were replaced. These things not only don't happen anymore, but in many cases have been actively retconned out or magicked away. Where the constant sense that something big was underway now tends to subvert the stories being told and stunt character growth, 20 years ago we had a culture where the writers were expected to juggle both.