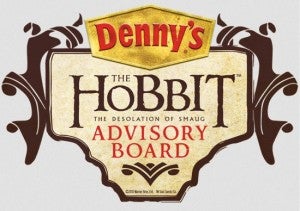 For the last several months, Comicbook.com has been part of an Advisory Board for Denny’s restaurant in regards to some upcoming promotions they are doing related to The Hobbit: The Desolation of Smaug. As you might recall, last year, Denny’s offered several new menu items inspired by The Hobbit: An Unexpected Journey.

Tomorrow, Denny’s will be kicking off “The Search for Middle-earth’s Greatest Fan” contest in celebration of their renewed partnership with Warner Bros. and The Hobbit: The Desolation of Smaug.  “The Search for Middle-earth’s Greatest Fan” is a video contest that will run throughout the entire month of October, and the top five entries will ultimately go to, and be judged by, Peter Jackson. The winning entry will receive a once-in-a-lifetime prize, a two-night trip to the movie’s world premiere (location TBD).

We’ll have more details on the contest tomorrow, including a link to the official contest details. But we wanted to let our readers know about it early. The Hobbit: The Desolation of Smaug is scheduled to be released in movie theaters on December 13, 2013

Denny’s To Launch The Hobbit: The Desolation Of Smaug Fan Contest