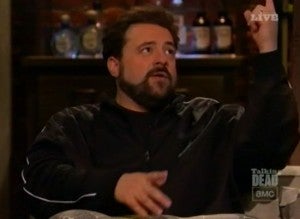 Warning: Spoilers ahead for AMC's The Walking Dead, including tonight's episode.

Following last week's episode of The Walking Dead, ComicBook.com ran a story in which we speculated that the shocking departure of Daryl Dixon from Rick's band of survivors wasn't a divorce so much as a weekend away.

Actually, to be more specific, we said that "the minute Daryl walked away from Rick, I started thinking about what moment could bring him back, and the big way  he would come through for the group and redeem himself."

We called it the "Han Solo moment," comparing it to the point in Star Wars when, just as everything seems lost, the smuggler who took his money and left suddenly reappears to save the day and clear the path for the destruction of the Death Star.

And then, the next day, a bonus scene from Talking Dead, which featured filmmaker Kevin Smith as its first guest of the season, featured the following quote from Smith:

“Daryl is like the Han Solo of the show, man. He’s all attitude. He’s smooth. He’s crisp.”

Now, obviously Smith is pretty well-known for his Star Wars references. And the idea of an aloof, badass character being like Han Solo isn't exactly original. AND everyone was talking about Han Solo last week on account of the possibility that he could get a spinoff movie.

Still, one has to wonder whether, as someone who works at AMC and appeared on Talking Dead, Smith might have been oh-so-subtly hinting at this week's events. That bold, redemptive moment is one of the keys to Han's character development, and to make that comparison right after Daryl left? We can't be the only ones who noticed the pattern.

Jake Gyllenhaal and Jessica Chastain's The Division Movie Gets a Director