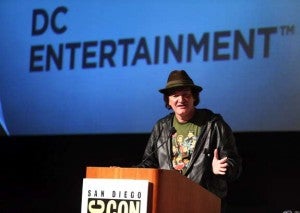 DC Entertainment announced earlier today that R.M. Guéra (Scalped) has been named as the interior artist on the Django Unchained miniseries, with DC co-publisher Jim Lee on board for the variant cover of issue #1.

The miniseries was announced at San Diego Comic-Con International, but no creative team was attached at that time.

"Django Unchained tells the story of Django, a slave-turned-bounty hunter who, with the help of his mentor, sets out to rescue his wife from a ruthless Mississippi plantation owner," said the initial announcement on DC Comics's blog, made during Comic-Con.

The publisher initially announced that the series would begin in November, but the new announcement says December. That probably makes more sense, given that most movie tie-ins tend to come out within a month of the film's release, and Django Unchained will hit theaters on Christmas Day.

The five-issue miniseries is reportedly based on the film's original screenplay, meaning that there will likely be some material in the comics that doesn't make it into the film. Something similar happened when Marvel and writer/artist Evan Dorkin adapted Bill & Ted's Bogus Journey, with a wildly different version of the story coming to the comics than ended up onscreen.