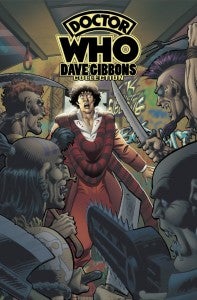 While it's not immediately clear how long it will take before IDW Publishing begins to make Doctor Who comic books featuring a Doctor who looks like Peter Capaldi, it seems clear that the publisher isn't going to rush anything out to have it ready for the next round of solicitations. After Capaldi's coronation ceremony made big ratings yesterday and the entertainment world was abuzz with the newest iteration of the fifty-year-old character, ComicBook.com reached out to IDW to ask whether we might see Capaldi penciled in to the comics soon. UPDATE: Colorist Charlie Kirchoff, who works with IDW, chimed in below in the comments, pointing out, "IDW only has the Doctor Who license until December of this year, so its unlikely you'll see the 12th Doctor featured in an IDW publication." "So...any official word on when IDW plans to roll out the Twelfth Doctor in the comics?" We asked. "Sorry, I've got nothing," came the publisher's response. While obviously it wouldn't be surprising to see them try and get something together in time for the start of the new series of Doctor Who on TV, speculation that they might try to make a book tying into the changes of the Christmas Special (don't laugh--they managed to time their Star Trek Into Darkness tie-ins perfectly) appears likely to be dashed, then; it sounds likely that anything would be ready for the December comics, which will be solicited only about a month from now, so presumably a major status quo change in a big book would be something the publisher would be preparing for already, likely with a handy non-denial denial all ready to go. We'll keep you posted as there's news to be had.

Doctor Who Comics: When Will We See the Twelfth Doctor? Not Just Yet