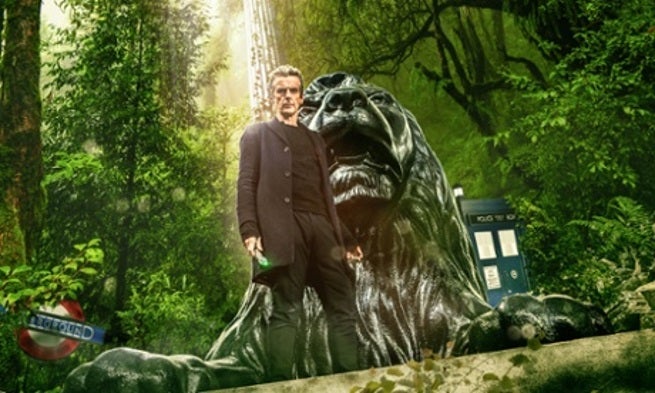 Clara and Danny are with a class of kids in a museum at night. As they walk through, one of the children notice the inside of a tree, where one ring is fatter than all the others, and points it out to Clara. The guard unlocks the door for them and they push their way out. They find London is overgrown. We zoom out to see reports of a similar phenomenon around the world.

Danny leads the children out into the forest. A broadcast announces that the government organization Cobra is planning on burning the woods down. The Doctor continues to examine the mysterious trees, with Mauve at his side. Mauve's mother is heading out to pick Mauve up when she notices the forest outside of her door. Danny, Clara and the children find the TARDIS. Ruby, one of the children, notice the trees have no rings, and the Doctor arrives to point out that's because the trees just appeared overnight. Something Clara says make the Doctor realize that someone must have messed with the fabric of time for this forest to appear. Everyone piles into the TARDIS. The Doctor says there must be some sort of communication going on, but there's no communication channels being used. He notices homework books and starts looking for Mauve. She's gone. Clara mentions that Mauve has been hearing voices since her sister went missing. The Doctor and Clara go looking for her.

The large statues in the square falls over, nearly crushing the Doctor ad Clara. Danny brings the children out to look for them. Clara notices that the path their walking down is growing over behind them. They find Mauve's phone. Mauve runs through the forest and comes upon the government teams getting ready to burn. She runs the other way, leaving another clue behind. The Doctor and Clara continue to follow. Hey run into the government team as they begin to try to burn the forest, but it doesn't work. The Doctor shows Clara Mauve's homework journal with a solar flare drawn in it. He notes that it is dated for today. They hear a howl of wolves.

Wolves chase Mauve through the forest. She finds Clara and the Doctor on the other side of a fence. She finds an opening and goes to them and starts waving her hands above her head. The wolves leap the fence and run away. A tiger comes up from behind them. Danny shows up and scares it away with a flashlight. Mauve starts running again, and they all follow. Mauve believes she's responsible for the forest, saying she has thoughts to come true. The Doctor increases gravity around her and reveals creatures that look like fireflies. They speak through Mauve, saying they are ancient life that came to the forest. The Doctor lets them go. Clara tells the Doctor to use the TARDIS to save who he can.

When they get to the TARDIS, Clara tells the Doctor to just save himself, that the kids have nowhere to go, Danny won't leave them, and she doesn't want to be the last of her kind. The Doctor leaves in the TARDIS. From the TARDIS, he watches the solar flare begin. He returns and calls Clara back, but they try to ignore him. The children turn around and start heading towards him, and so they do. He brings them on the TARDIS and starts explaining the solar flare. Then he starts to explain that the trees will actually save them by pumping up the atmosphere with extra oxygen. Danny remembers that the government is out there to defoliate the trees. The Doctor says they'll call everyone on Earth and tell them to leave the trees alone. Mauve volunteers to make the call.

The Doctor makes the calls and Mauve delivers the message. She then sees her mom outside and runs to her. Clara and Danny have another conversation about her lying about being on the TARDIS. Clara and the Doctor go to space to watch the flare. Missy watches remotely. The trees disappear. The Doctor explains that humanity will forget the forest ever existed, only remembering the feeling. Muave and her mother go home. The firefly creatures bring her sister back to her.

Doctor Who Series 8 Episode 10: The Forest Of The Night Recap With Spoilers