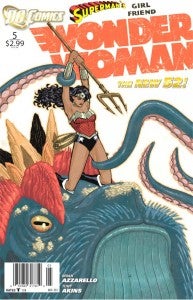 On Wednesday, DC Comics shocked comic book fans by announcing that Superman and Wonder Woman would start dating. While this new twist has generated a lot of controversy for a number of reasons, one particular side effect of this announcement stands out more than most.

Of course, these headlines are coming from an entertainment magazine and not DC Comics directly (even though Time Warner owns both), but DC Comics had to know this was going to happen. Superman is perhaps the greatest icon in comic books, so no matter who he is paired up with news agencies are often going to make him the central focus of the headline.

Has DC Comics effectively reduced Wonder Woman to now always wearing the label Superman’s Girlfriend Wonder Woman? If they add that subtitle to her masthead, then you will know they’ve gone to far.