Last week, following the shocking final scene of AMC's The Walking Dead, we speculated about whether Bob Stookey was "tainted meat."

The character, who was kidnapped by the cannibals formerly headquartered out of Terminus, seemed to be agitated just before his abduction.

He also seemed vaguely bemused at one point during Gareth's rant about cannibalism, leading many fans to suspect that what we'll see next is a re-enactment of a famous scene from the comics, in which Dale was taken by the Hunters and partially eaten before revealing -- to their horror -- that he had been bitten by a walker and was "tainted meat."

There had been speculation for months that the residents of Terminus would turn out to be The Hunters -- a group of stealthy cannibals who hunted Rick's group in the comics, ultimately killing Dale (they also attempted to abduct Glenn, but failed). At first, it was simply timing: when Andrew J. West was signed on as Gareth, fans started to wonder who from the comics he might be. They quickly landed on Chris, the leader of the Hunters, and once that opinion was formed, fans started to see evidence to support it. 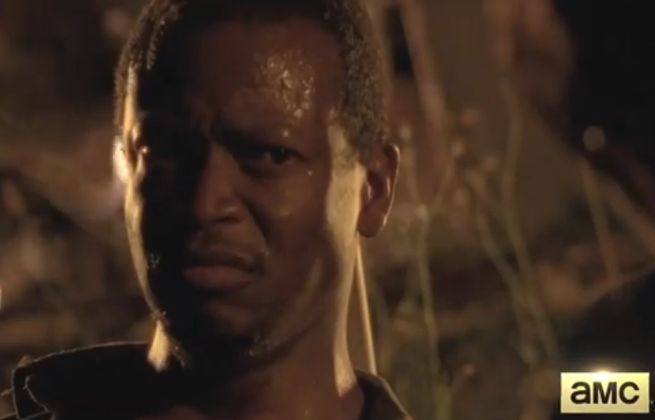 In any event, the curious thing about "tainted meat" is that there's an important element of the zombie pandemic that happened in the TV show, but not the comics.

That is, the Season One finale.

In the final episode of the series' first season, Rick and his group visited the Centers for Disease Control and Prevention in Atlanta in the hopes of finding out what was going on, and what the government was doing to help.

Not much, as it turns out; there was one lone scientist still working at the CDC, and the rest of the government was shut down, consumed or had gone into hiding. He did reveal a key piece of information to Rick, though -- something that wouldn't be revealed to the full group until much later.

"We are all infected," Dr. Jenner told him. Everyone -- whether they're bitten or not -- will reanimate after death, unless their brain is destroyed.

So here's the question that occurred to us, and some of our commenters here and on social media: does it even matter if Bob is "tainted meat?" Is the outbreak different enough on the TV show that consuming meat that's already been infected wouldn't pose any additional risk to the Hunters?

Well, probably. If everyone is already infected, anyway, there's no particualr reason to worry about the virus just entering your system. The real question becomes exactly how do the chemical reactions work that change the virus from dormant to active. If, for instance, there's something unique to the saliva of the walker that causes the virus to mutate or "activate," then tainted meat could still have an impact.

It's also worth noting that virtually all bacteria and viruses can be cooked out of meat, so if it were being prepared properly, there's an argument to be made that even in the comics it wouldn't have been that big a deal.

What do you think -- if Bob was bitten by a walker, are Gareth and company screwed?

Does Tainted Meat Even Matter In The Walking Dead World?