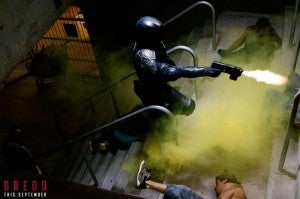 Yesterday at the London Film & Comic Con, Bleeding Cool is reporting that Dredd 3D writer Alex Garland revealed to the audience that the film is the first in a planned trilogy, and that he's been told they will have at least a second and probably a third movie as long as Dredd makes at least $50 million in the U.S.

"We’ll see a sequel if the gross is above $50 million in the U.S.," Garland is quoted as saying. "It’s a simple financial equation. We’re an independent movie."

An independent movie starring Karl Urban of Star Trek and Lena Headey of 300 fame, of course, but you get where he's coming from.

While a scene from the film was screened in London yesterday, which got generally positive response from the fans Bleeding Cool talked to, the full film will be screened for what appears likely to be the first time next Wednesday night at San Diego Comic-Con International.

Garland told fans that he has three films planned, including a script already written which is about Judge Dredd journeying out of Mega City One and into the Cursed Earth. While he said it wouldn't work to do that, or a story featuring the Dark Judges, before first establishing Dredd and his city so that fans have an appreciation of what it means to subvert them, longtime fans will of course remember that the original Judge Dredd film starring Sylvester Stallone featured exactly that, as he was stripped of his authority and cast out into the Cursed Earth after being framed.

"If they want to make sequels, I’ve got a story that goes from this one into the origins of Dredd and the city," Garland said. "Then the third one has would have a strange, existential attack from the Dark Judges."

Dredd 3D will be in U.S. theaters on September 21, 2012. Look for audience impressions after Comic-Con to give you a sense for how likely all these sequels might be.

Dredd Designed as the First of a Trilogy