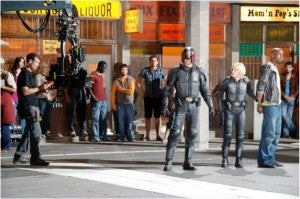 With the theatrical release of Dredd still months away, not a lot is yet known about the new Karl Urban vehicle that reinvents 2000AD’s beloved Judge Dredd for an audience that has hopefully forgotten about the much-reviled Sylvester Stallone version from fifteen or so years ago.

Still, there's a ton of anticipation being built up around the gritty series reboot and with the release of a new trailer, it seemed as good a time as any to preview a few of the things we know.

And no, before you ask, there's no real way of knowing yet whether or not the helmet ever comes off. Many fans were upset by the amount of time we spent looking at Stallone's face the last time around, and that won't happen here. Still, just the fact that Karl Urban is a big fan of the comic book Dredd might not be enough to keep that one little part of the mythology intact completely.

Urban, who has starred in movies like RED and Star Trek, is a bona fide box office draw and it's hard to imagine a movie studio willing to pay him and then hide his face completely. We've also seen what appears to be a scene of him putting the helmet on. Still, I personally hold out hope that they'll see it more like paying him to be a voice actor and that the character integrity has value beyond just the movie poster.

Not necessarily seen in the trailer, this one comes from official blurbs on the movie's Facebook page and other official materials.

Even though this film seems on balance to be more of a realistic approach to Judge Dredd’s mythology than the techno-fantasy of the first film was, Judge Anderson’s psychic abilities are present in the film—something that pushes it into the range of the super-science and a little more fantastical than the kind of gritty, ground-level movie we expected. That’s not necessarily a bad thing, of course—it’s just to say that Dredd may be more Avengers than Dark Knight Rises. And millions and millions of people liked The Avengers…!

It's a futuristic drug war

Judges Dredd and Anderson are squaring off against Lena Headey's Ma-Ma Madrigal, who runs a drug cartel specializing in the designer drug Slo-Mo. We've seen some of its effects in the highly stylized trailer, and we've seen taht Ma-Ma is apparently not above using it herself in her private moments--but the bottom line is, she's a beautiful and ruthless crime boss with a specialized product nobody else has access to.

It actually brings to mind The White Rabbit, a villainous weapons designer from DC Comics who used to work with John Henry Irons before he became Steel.

It's a siege film

It may be a war, but from the look of the ads, there won't be a whole lot of open-field fighting. The reason so many of the movie's still images appear to revolve around Dredd kicking down doors and gunning down rooms full of people may be that there simply isn't much else going on. Based on what we've seen, it looks as if the block that Ma-Ma lives on is more or less locked down, with Dredd and Anderson trapped inside steel walls and facing off against hundreds of Ma-Ma's employees, the junkies she serves and the rest of the community who are beholden to her for their safety.

In that way, it's not entirely unlike what we seem to be seeing come out of The Dark Knight Rises, of course, with the bridges out of town detonated and a class war coming.

It isn't a straight action movie

The trailer itself is oddly arty and the slow-motion effects and vibrant colors of the thing betray a movie that isn't as straightforward an action movie as the original Judge Dredd, or as many fans expected. Even if it isn't as campy as the 1995 version, it doesn't mean this is just "Die Hard in the future," as many fans expected. Rather, it seems more like something you might find set in the world of The Fifth Element.

Why, oh why, couldn't it have been Rob Schneider? I wanted his character to die the whole time!

A dangerous but ultimately noble supporting character in the Judge Dredd comics, Fergee died a hero in the comics but only after serving as an official-unofficial Judge himself for a while. Eagle-eyed observers have noted that the trailer contains a bit of footage with a news report indicating memorial rallies for Fergee, something that many fans have taken to mean that the movie isn't stand-alone in the way Stallone's Judge Dredd was, but is instead set at least partially in the world of the comics.