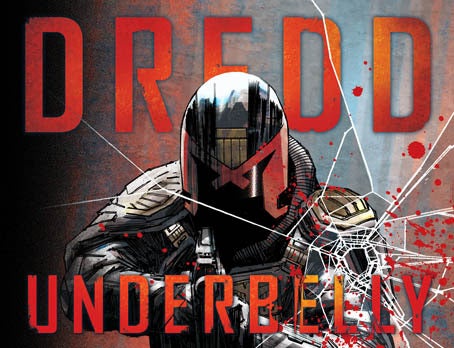 A large, organized group of fans who run a Facebook page dedicated to getting a sequel for Dredd 3D, the 2012 comic book adaptation from Lionsgate, are trying a slightly new tactic to get attention for their cause: they're supporting the comic books. In the past, Make a Dredd Sequel has organized efforts around buying DVDs, Blu-rays and streaming the movie online in order to send the message to Hollywood that there's a demand for more of Karl Urban's portrayal of the famed 2000AD star Judge Dredd. With the final order cutoff through Diamond Comics Distributors coming tomorrow, though, they're hoping that this weekend fans will turn out to pre-order copies of Dredd: Underbelly, the official comic book sequel to the movie, when it comes to the U.S. as a one-shot. Here's the full message they sent to supporters Friday night: The comic book sequel to the critically-acclaimed movie DREDD is coming to North America as a special US-format one-shot in January - but the cut-off date for orders is THIS MONDAY! In the wake of Ma-Ma's death, other criminal gangs in Mega-City One are moving into the power vacuum, trying to fill the gap in the market left by the Slo-Mo drug. When a corpse dump is discovered in a rad-pit, the bodies are all revealed to be mutants. Could the dead be connected with an outfit smuggling illegal refugees into the city from the Cursed Earth? Dredd once again teams with Psi-Judge Anderson as they scour the underworld for the perps responsible in order to to bring them to justice - but will they be able to face the implications for their world and the on-going fight against crime. Written by Arthur Wyatt and drawn by Henry Flint, this is the first ever time 2000 AD has ever created a comic specifically for the North American market - and now's your chance to get another taste of the world of DREDD! Visit your local comic book retailer and ask them to order a copy of DREDD: UNDERBELLY now with the Diamond order code NOV131215!