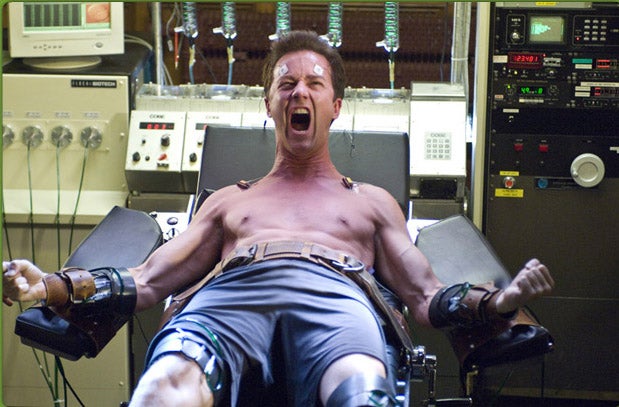 Since his split from The Hulk and Marvel Studios, Edward Norton has remained virtually mute on the less-than-ceremonious departure in 2010--until now.

Speaking with NPR's Fresh Air, Norton expressed that his break-up with The Avengers franchise was a creative choice. Though he enjoyed the experience of playing a comic book superhero once, he said, he knew that would quickly burn out playing the same character in the same scenario over and over again. Additionally, he didn't want to compromise his schedule to Marvel's production calendar, potentially missing out on other opportunities like Moon Rise Kingdom.

This, of course, is a different tune from what was reported in 2010. As Marvel ramped up their plans for The Avengers, they dumped Norton as negotiations soured. Norton's party claimed that Marvel low-balled the actor, while Marvel countered that Norton wasn't enough of a team player to support an ensemble production like The Avengers.

"My feeling was that I experimented and experienced what I wanted to. I really, really enjoyed it. And yet, I looked at the balance of time in life that one spends not only making those sorts of films but then especially putting them out, and the obligations that rightly come with that. There were just a lot of things—I wanted more diversity. I sort of chose to continue on my path of having a diversity of experiences. Maybe on some unconscious level, I didn’t want to have an association with one thing in any way degrade my effectiveness as an actor, in characters. I think you can sort of do anything once, but if you do it too many times, it can become a suit that’s hard to take off, in other peoples’ eyes. And if I had continued on with it, I wouldn’t have made Moonrise Kingdom, or Grand Budapest, or Birdman, because those all overlapped with [Avengers]. And those were more the priority for me, but I continue to be a fan and I’m really, really happy I got to do it once."

Regardless of the split's true nature, it seemed to have worked out for the best. Norton's replacement, Mark Ruffalo, was a hit with critics, and Norton went on to carry numerous critically-acclaimed roles. His most recent turn in Birdman is already generating Oscar buzz. It should be noted that in the film Norton plays a stage actor with a temper that would put Bruce Banner's to shame.

Edward Norton Explains Why He Left The Hulk And The Avengers