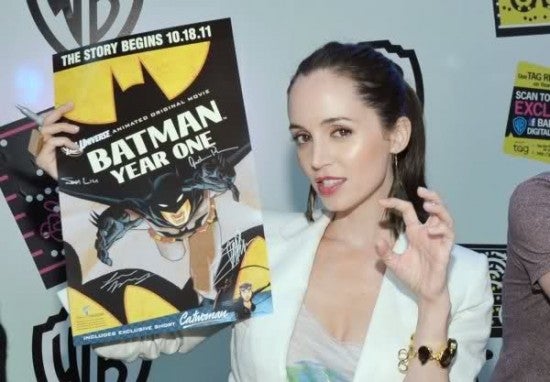 Frequent Joss Whedon collaborator Eliza Dushku, who starred as Selina Kyle/Catwoman in the animated Batman: Year One and a Catwoman short film attached to its DVD release, told us today the she wouldn't mind suiting up to play the character in a live action adaptation.

The actress, known for playing badass female characters dating all the way back to Buffy the Vampire Slayer, currently appears on Disney XD's Hulk and the Agents of S.M.A.S.H., but would cross party lines to play Batman's iconic foe/love interest again if the opportunity arose.

"I of course will keep my phone on and would scratch and claw at the chance to film her in live action form," Dushku told ComicBook.com in an interview earlier today in support of a new project launching tomorrow from Machinima.

She'd also be age-appropriate, since an older Batman (Ben Affleck, about ten years Dushku's senior) means they wouldn't likely be looking for teenagers to play some of his best-known friends and foes. We noted all of this, pointed it out to Dushku and asked whether she would be interested to play the role if it came around -- say, once Batfleck gets a solo film.

Ben McKenzie, who played Batman in the same animated movie, is returning to Gotham City to play Jim Gordon in Fox's Gotham, so Dushku -- one of a handful of actors who's persistently named in almost any "who should play..." conversation fanboys have -- would be in good company if she could manage to land the role a second time.

Keep an eye peeled tomorrow for our full interview.

Eliza Dushku Would Play Catwoman Again For Batman vs. Superman