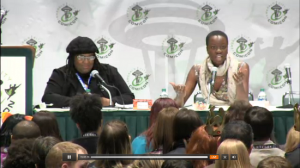 Danai Gurira, star of AMC's The Walking Dead, told an audience at Emerald City Comic Con today that her character is successful in part because she simply doesn't consider the possibility of losing.

She likened Michonne's persona to those of elite, female Liberian soldiers who had an innate belief that they could use their bodies to accomplish their next goals.

During another panel yesterday, The Walking Dead artist Charlie Adlard revealed that for the only time ever, when he first met Gurira, the resemblance to Michonne was so uncanny that he got chills.

Star Wars Detours Should Be Released on Disney+