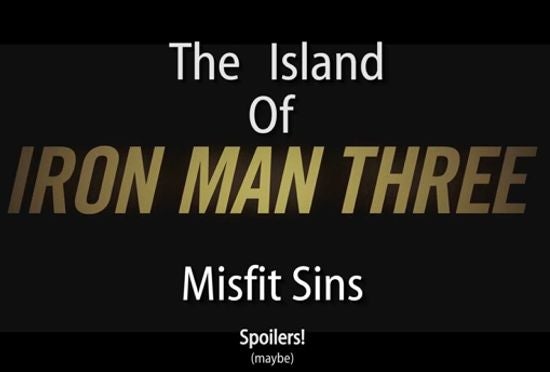 A couple days ago, Cinema Sins released a video about everything wrong with Iron Man 3. The list of 127 movie sins for Iron Man 3 were compiled from submissions from their viewers.

However, it turns out that their viewers submitted quite a few sins that Cinema Sins didn't use for whatever reason. Now, Cinema Sins has created another video called "The Island of Iron Man 3 Misfit Sins" to share some of the unused sins.

Why didn't these sins make the cut for their first Iron Man 3 video? When you listen to the sins, the reasons will become obvious. For instance, even though viewers were directed to submit sins for Iron Man 3, a couple apparently wanted to talk about Man Of Steel instead.

For example, here's one of the misfit sins: "At the end of the movie when Zod and Superman crash into The Hubble I was thinking something like. 'From all the random space debris, you had to just pick the Hubble, didn't you Nolan?'"