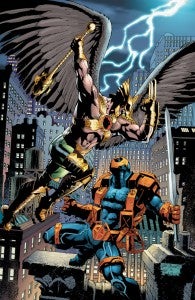 Former Red Robin and Legion Lost writer Fabian Nicieza will script Hawkman #15 from an outline by Rob Liefeld, according to DC Comics's solicitations. It will continue the Hawkman/Green Arrow/Deathstroke crossover Wanted, in a month when most of DC's "The Edge" line (which includes Grifter and Deathstroke, both of which Liefeld had been working on)  are crossing over with one another in a story informed by developments in the Team Seven series that features a number of those characters. It's the only one of the three titles he recently quit that Liefeld's name appears on in solicitations, and while the other titles feature writers who you won't be surprised to see attached to them, The Savage Hawkman features Nicieza, long a fixture in the comics field, who has recently had less time for monthly comic books, in light of the demands on his schedule from other fields. In any case, this may buy the publisher some time. In about a month, fans will be at the New York Comic Con, meaning that if Nicieza isn't taking on the title as a monthly, this could set them up for an announcement on a very big stage.