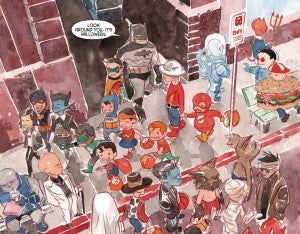 One of the many criticisms of ComiXology's digital comics being stored on the cloud and not actually delivered to the reader as a downloadable product that they can use across their devices is the idea that publishers can enter already-published products and "tinker."

But like when George Lucas decided that Han Solo "never shot first", it's often controversial with the fans when content providers revisit their product to decide that, for example, Tim Drake was never Robin or certain characters never existed at all. That's something that DC admits to having changed at the ComiXology level as well as in their collected editions, making physical, single-issue comics the only form of storytelling immune to the publisher's whims if they later think better of what they already printed.

That's where yesterday's Batman: Li'l Gotham Halloween special comes in, a 99 cent digital comic that, frankly, has probably already given DC and the readers a bit more agita than it was worth. 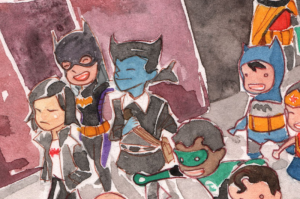 We pointed out when the project was announced on Tuesday that it seemed to feature Stephanie Brown and Cassandra Cain--a pair of erstwhile Batgirls who no longer exist in the post-Flashpoint DC Universe. The next day, a number of fans noticed that while those characters themselves never appeared within the actual story, a trick-or-treater dressed as the Stephanie Brown Batgirl was clearly visible in a crowd scene.

DC leapt into action, recoloring first the character's hair, and then both the hair and the entire costume, in order to make "Stephanie Brown" vanish into the background. Above, you can see the original, untouched art from Dustin Nguyen and Derek Fridofs (via Bleeding Cool), followed by a screen capture from my iPhone that features the version with the recolored hair and a purported third version, also from Bleeding Cool, which shows further alterations to the costume. 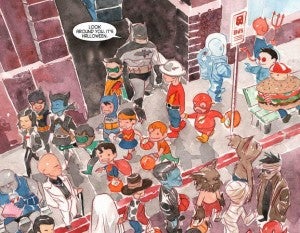 These changes apparently do not affect your copies if you bought the book on ComiXology before a given change was instituted--my copy online looks the same as it does on the phone.

The thing that seems to baffle many fans talking about this change around the Internet is the needlessness of it; this is a non-canonical story happening outside of the New 52 (see Batman's underwear?)--it's an all-ages book that features kids dressed up at superheroes, including a Batman (seen in the middle picture on the far right) who is wearing a blue cowl and underwear. Superman is wearing his red trunks and sporting a spit curl--and look at that Jay Garrick! Not only does he not look anything like that in the New 52, but the character isn't even known to exist on Earth One.

This splash page was supposed to be a fun, entertaining little piece of Easter egg-filled goodness (anybody else notice Woody from Toy Story in there?), and stepping in to remove a fan-favorite character steps on that. The whole thing feels not just like micromanagement (which is understandable--the company needs to be able to control how its trademarks are perceived) but of meanness, making seemingly arbitrary changes that have absolutely no effect on the story, except the degree to which some fans enjoy it.

The bottom line is that as long as certain beloved characters are not allowed to appear in the comics, they'll be clamored for by their fan bases. If those fan bases, as DC co-publisher Dan DiDio has intimated, are not large enough to be listened to, that's a fair call for the publisher to make--but it seems it would behoove them, then, to simply prevent these characters and concepts from seeing print. The moment they're allowed to be published, and then altered to fit the current managerial vision of the DC Universe, the company is likely to alienate far more people than if the characters had simply never appeared to begin with. That DC didn't learn this after their Smallville Season Eleven fiasco (which also involved Stephanie Brown) is evidence that they just don't care.

Motherland: Fort Salem Stars on Their Evolution to Season 2 and Feeling the Love From Fans