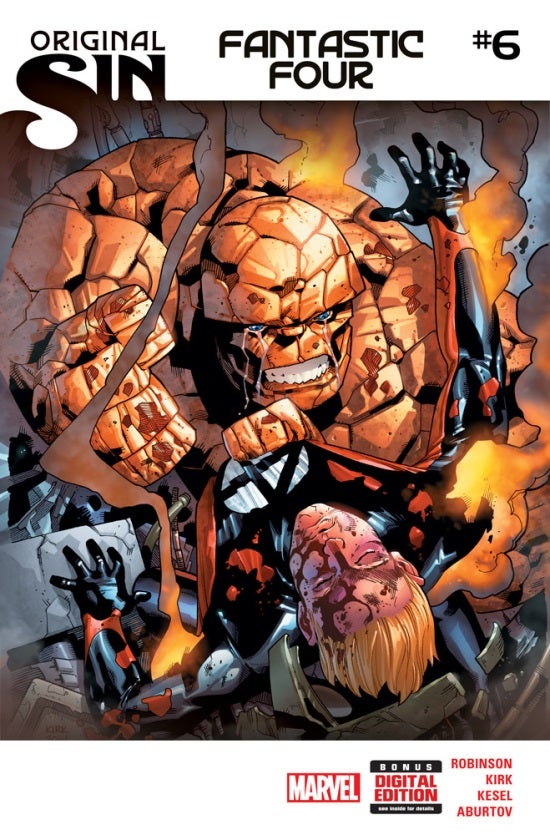 Here it is, the issue I’ve been somewhat dreading.

James Robinson has been scratching my Fantastic Four nostalgia/continuity itch so perfectly lately that I’ve been dubious about this Original Sin tie-in which promises to reveal some past wrongdoing on the part of Johnny “Human Torch” Storm and Reed “Mister Fantastic” Richards toward Ben “The Thing” Grimm.

Apart from a healthy and natural skepticism toward event tie-in issues, I’m generally a bit nervous about introducing what arguably amounts to a retcon into a team or character’s past for the sake of injecting drama.  Apparently though, I needn’t have worried for two reasons.  First, so far this situation hangs together perfectly.  Secondly, the true test will be in the next issue when it is more fully explored and explained.  Really, this issue is mostly transition, setting up things that will be more fully explored in the next issue; however, that doesn’t mean that this issue isn’t worthy of attention. 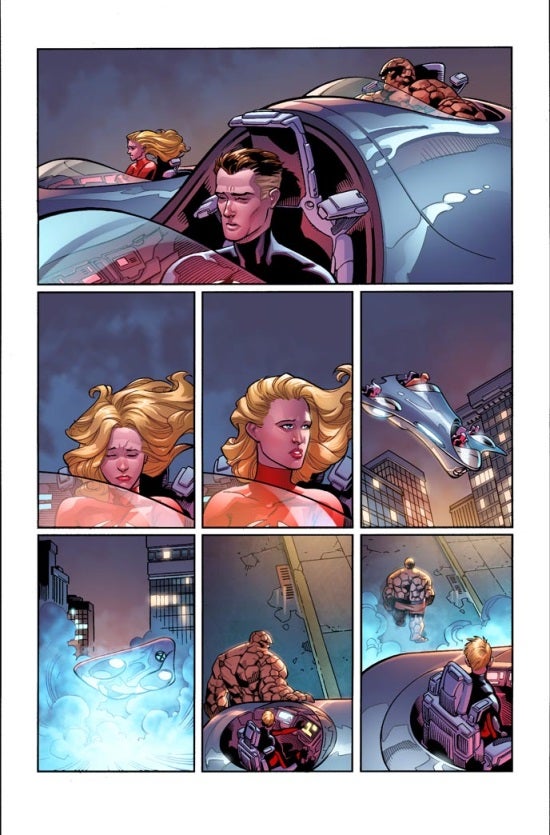 Considering this issue on its own merits, it justifies more praise for writer Robinson, artist Leonard Kirk, inker Karl Kesel, and colorist Jesus Aburtov as well as the guest art team of Dean Haspiel, Nolan Woodward, and Veronica Gandini.  Once again, I’ve received an issue of Fantastic Four which feels like old-school FF while managing to integrate the team’s expanded supporting cast and providing a satisfying read.

At this point, a quick summary would be in order just so that we’re on the same page moving forward.  So… SPOILERS!!!

In the last issue, the FF found themselves in court due to the events of prior issues.  As a result, Reed and Sue have had their children placed into protective custody with Jim Hammond, Android Human Torch and Agent of S.H.I.E.L.D.  When Reed, Sue, and Johnny try to reenter the Baxter Building, the Avengers are waiting to prevent their entry which prompts Sue to lash out with her powers, starting a fight to be depicted in the next issue. The kids of the Future Foundation have to deal with and tell Hammond the news that S.H.I.E.L.D. is threatening to shut down Dragon Man because he’s only an android and not a real living being.  Finally, we are treated to the start of Reed and Johnny’s “original sin” which involves a failed attempt to turn Ben human at some point in the team’s past.  It appears from the final page of this issue that the experiment fails on a spectacular level.

Credit where credit is due, Robinson is writing this series beautifully.  He’s reached a point where I’m not really picking up on any dialogue in particular that feels out of character or as though it deviates from the manner in which the characters would normally speak.  Also, I’m glad he’s giving Sue a chance to kick some butt, particularly against the Avengers.  She is possibly the most powerful member of the team when she really lets herself loose and gets inventive with her powers.  Frankly, it’s a shame we don’t get to see that more.  I love the setup in this issue and I am unbelievably stoked to actually see this fight in the next issue.  I should also note that her freak-out here makes perfect sense narrative given the fact that her children have been taken away as well as the promised invasion of their personal possessions and forced relocation from their home.

Additionally, I’m glad that Robinson is giving the Future Foundation kids something to do rather than shunting them off to the sidelines.  Also, the questions about the nature of life and what constitutes a living being that promise to arise from Dragon Man and Jim Hammond’s status as androids should make for some interesting situations.

Kudos too to Robinson for Johnny’s little continuity-laden dig at Captain America for being “tied to orders” when he was perfectly willing to defy them during the Civil War event.  It is touches like this which make me feel like a writer is making an effort to really set a story in the Marvel Universe.  Might it confuse a new reader?  Maybe, but it’s just a quick reference and the meaning is clear.  What it does accomplish though is make this world feel like it truly has history and like we really are building on past material.  All that’s missing is a clever editorial caption directing a reader to pick up Civil War somewhere in some form.  Honestly, whatever happened to editorial captions? 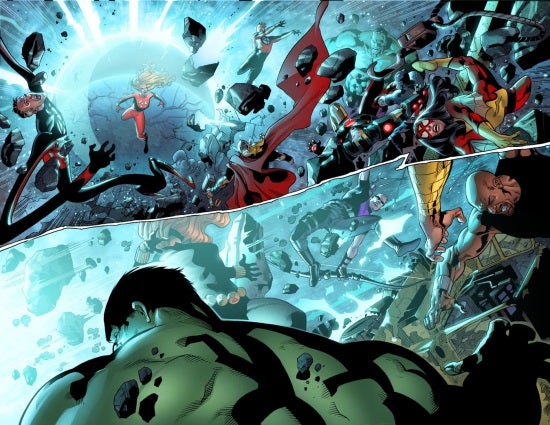 urning to the art, things are tight and beautiful in this issue.  I was honestly a little nervous with the main art in the last book because there were some instances where faces appeared to be less than perfect with questionable expressions or vague proportions.  At the time, I chalked that up to possibly being a result of a different inker being on the book; however, with Karl Kesel back working on Leonard Kirk’s pencils I have very few complaints.  In this issue, faces and expressions are beautifully rendered across the board.  As in past issues, the reader is treated to a mix of more traditional panel layouts as well as more innovative ones, which keeps this feeling very comic book-y in a good way.  Also, I have to thank Kirk for going with Captain America’s traditional costume rather than his newer (and in my opinion, inferior) getup.  Finally, it’s worth noting that Kirk is great at capturing anatomy perfectly from a variety of angles and in some pretty odd poses.

I love the look of this book and a good part of that has to do with colorist Jesus Aburtov.  He really helps enhance the mood of moments through his selection of color palette.  Otherworldly scenes are enhanced with odd purples and blues, dark and brooding scenes are appropriately muted, and Sue’s invisible force blast is enhanced with bluish-white light pervading the scene.  Aburtov is pretty much excellent across the board.  Really, the main art here is a vision to behold.

This brings me to the guest art depicting the FF’s “original sin” by Dean Haspiel, Nolan Woodward, and Veronica Gandini.  It’s pretty great stuff and has a charming retro feel that complements the fact that the action here takes place in the team’s past.  Haspiel does a great job with capturing a Kirby-esque look to the machinery and various doodads as well as producing characters with expressive faces and spot-on anatomy.  His second to last page showing the process Ben’s transformation is particularly noteworthy for its interesting layout and engaging design.  Kudos too to Gandini who uses an appropriately bright and lively color palette throughout this section which helps to enhance the style and the classic feel that the artist seems to be going for.  Oh, and I would remiss if I didn’t compliment Haspiel on making the transformation chamber call to mind a H.E.R.B.I.E. robot without being too blatant about it.

The last positive that I want to mention is the fact that Robinson (or perhaps the editor, Mark Paniccia) is making use of guest artists for flashbacks.  It reminds me of Robinson’s Starman which used a variety of artists to interesting and engaging effect, and is why I suspect that Robinson is behind the choice to utilize artists in addition to Leonard Kirk.  I honestly hope this continues as it helps to add visual interest to this ongoing narrative. 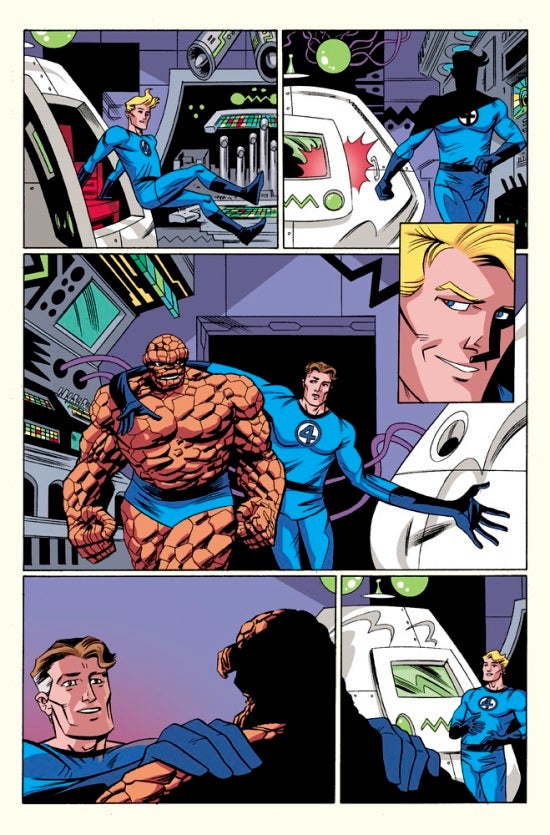 Once again, there’s not a lot to say here.  The only thing that really strikes me as “off” in this issue is the rendering of Ben’s “shout-y face” when he confronts Johnny but that’s more a matter of personal preference I think.  For me, there’s just something about it that doesn’t seem to jive with Kirk’s rendering of Ben’s face elsewhere.  I don’t know if it’s the proportions or what, but I just felt it worth mentioning.

I mentioned that I was dreading this issue.  The reason for this is that I question how this “original sin” story can be told given the FF’s past continuity.  The logic seems to be that somehow Ben can know for a fact that this attempt to turn him human would have been successful had Johnny not messed with the machine.  It also seems to discount every time that Ben was successfully turned human and then changed back to the Thing by choice/accident, had the ability to turn human at will negated, or lost a magical science-y doodad that allowed him to change back and forth at a whim.  The history of Ben’s many changes back and forth from human to monster is so long, complicated, and fraught with different magical, scientific, and godly influences that the challenge for Robinson is crafting a scenario in which Ben can believably become this enraged at Johnny when many more factors than he had a hand in his current state.  I’m also not entirely sure how Johnny opening the machine, sitting down, and closing it again as depicted in this issue could have caused it to fail so monumentally.  I only mention this briefly here as the real test of this story component will come in subsequent issues as it is more fleshed out.

For all my concerns for the immediate future, this is still a beautiful book expertly written.  I recommend it very highly and am genuinely intrigued to see where the story goes from here.  While I have some concerns, Robinson has proven himself thus far to be an excellent writer on this title with a keen grasp of the FF’s history.  For the foreseeable future, I’m just going to say it James Robinson and Leonard Kirk’s Fantastic Four is a must-read for longtime fans and new readers.