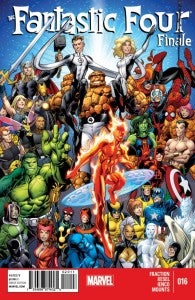 UPDATE: A new report at IGN Comics suggests that when Fantastic Four and FF end with their sixteenth issues (as was announced this morning at New York Comic Con's Cup o' Joe panel), Marvel's First Family will return with a new creative team and a new #1 in the spring.Specifically, they claim that Starman writer James Robinson will take the helm with artist Leonard Kirk, relaunching with a new Fantastic Four #1 in February to celebrate the new creative direction."The story starts at the end, with the demise of the Fantastic Four, and the rest of the series will unravel the mystery of how it happened," the report claims.

At today's Cup o' Joe Panel at New York Comic Con, Marvel Comics announced that Fantastic Four and FF would both draw to a close with January's #16 issues. This will also mark the end of Tom Brevoort's epic 141-issue run as the series editor on Fantastic Four.

The end of the series marks a first for Marvel NOW!, since it's a strong-selling series and one of Marvel's stalwarts and will end (and presumably eventually relaunch with a new #1) with the departure of the creative team (who are taking over Silver Surfer and Inhumanity).