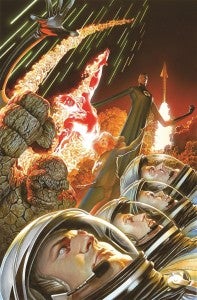 Following the abrupt cancellation of Fantastic Four and FF, Marvel Comics will merge the two titles into a new, rebooted Fantastic 4, with a new #1 written by Starman and Earth 2's James Robinson. The All-New Marvel Now title is going to kick off in February and feature art by Leonard Kirk and a variant cover by Alex Ross. "What I hope to do is tie in their past without making it too referential and (touch on) how the past can affect the future," Robinson told USA Today. "While I'm not reinventing the book, I'm certainly adding a side to it we maybe haven't seen for a while." 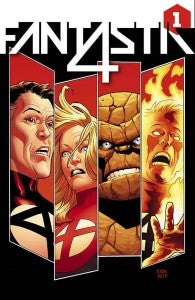 That side? A Fantastic Four in shambles, a powerless Torch, Ben Grimm in jail and accused of murder. They've been evicted from the Baxter Building and are facing down The Avengers. Robinson describes his first arc as the story of "a family finding the strength to face adversity through the help and love of each other." "We're going to see the fragmentation of the family due to villainous outside forces that are slowing picking at them and eroding them," Robinson added. "The arc I'm going to be telling is basically the fall and the rise of the Fantastic Four, and especially the fall and rise of Johnny Storm." Johnny will be at the center of a lot of the book's early events, with his relationships to The Thing and Wyatt Wingfoot taking center stage while The Thing rekindles his old romance with Alicia Masters, a girl he and Johnny once competed for. Franklin and Valeria Richards, though, will remain on board, along with other members of the Future Foundation who will join the book's supporting cast.