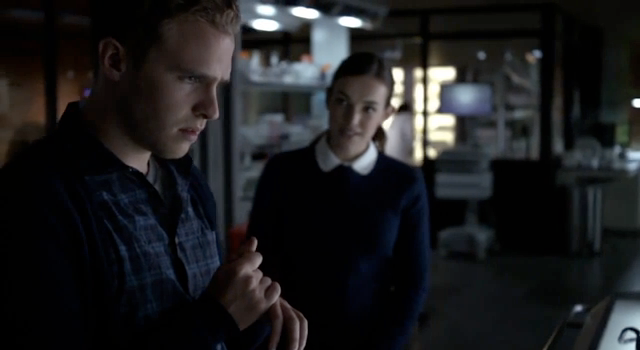 Marvel's Agents of S.H.I.E.L.D. has declassified another behind-the-scenes featurette, this time focusing on the now-peculiar relationship between Agents Fitz and Simmons.

After opening with a brief clip of the two agents, where Fitz has a difficult time articulating his feelings, the video shifted to a studio interview with actors Iain De Casestecker (Fitz) and Elizabeth Simmons (Simmons). The two actors discussed the complicated dynamic the S.H.I.E.L.D. agents now carry in Season Two. (Spoilers ahead for those haven't started Season Two.) Having left the team in a state of disenfranchisement, Simmons is now just a mental hallucination inside Fitz's damaged pysche.

Existing only as an imaginary friend, Simmons explained how her character will now be an extension of Fitz's current mental state, reflecting his current mood or feelings.

The two actors also discussed filming the climatic submarine scene, which Simmons described as "heart breaking." When the writing is as good as it is, Simmons explained, it was easy for her to convey the strong emotions that came out of that scene.

Fitz and Simmons' Relationship Takes A Strange Turn In Marvel's Agents Of S.H.I.E.L.D.