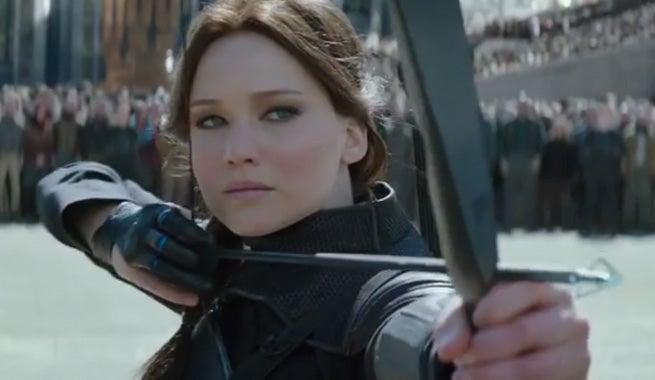 Earlier today, the trailer for Hunger Games: Mockingjay Part 2 was released by Lionsgate. If you want to see it on the big screen, go check out Jurassic World this weekend.

In the mean time, we've watched the trailer over and over again (just like you) and selected the five best moments Mockingjay Part 2's first trailer has to offer. If you haven't seen the trailer yet, fear not! We have it for you right here.

The last time we saw Peeta, he was strapped to a gurney at the end of Mockingjay Part 1. He tried to kill Katniss. Now, we see them reunited. Peeta looks humbled an nervous but nevertheless, the two hug and this is likely their first encounter since Peeta has been cured of his brainwashing.

As if the speech in the background wasn't epic enough, Katniss stands in front of the people of all 12 districts and aims her arrow at the Capitol. Finally... The Hunger Games saga will reach the climax it's been building cinematically for four years.

Katniss and her comrades are sent running for their lives as a black liquid-like substances bursts through the streets of the Capitol. It's nothing new seeing Katniss and Co. running in terror for lives but this scene looks huge. It looks as if the characters are truly in danger in the terrifying, Day After Tomorrow reminiscent scene.

Perhaps this one is more exciting for Game of Thrones fans. I have a feeling a lot of Hunger Games and Thrones fans overlap though. Gwendoline Christie plays Brienne of Tarth on Thrones and this is her first appearance in the Hunger Games franchise, where she'll be playing Commander Lyme. Lyme is a previous Hunger Games victor from District around the same time Haymitch was competing.

"Welcome to the 76th annual Hunger Games." Hopefully, Finnick is delivering the legendary line to Katniss as she stares down Snow. We don't know what they're looking at but war is upon us in Mockingjay Part 2. The war we've been waiting for. Let the games begin!

Peaky Blinders Season 6 Will Be The Final Season