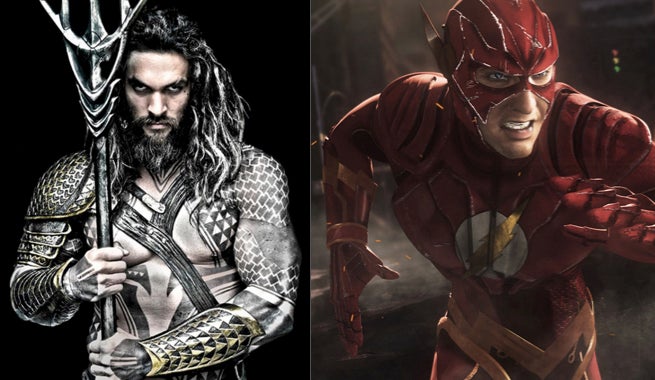 Everyone knows that Batman V. Superman: Dawn of Justice will serve as a soft intro to Zack Snyder’s next DC Comics film, the much-heralded Justice League, with cameos aplenty from The World's Greatest Superheroes.

With Aquaman, Cyborg, and The Flash cast, many assumed that Batman V. Superman would tease the League members to some degree, but were unsure of how the film would do it (Wonder Woman, if we're to believe leaked promo art, looks to factor rather heavily into the film's story). But thanks to newly surfaced rumors, Batman V. Superman's big screen teases for The Flash and Aquaman may have finally been revealed.

Fair warning, though: Don’t read any further if you’re trying to avoid spoilers—even the unconfirmed ones.

As Heroic Hollywood reported, Batman will briefly see The Flash (Ezra Miller) as a blur and an imprisoned Aquaman (Jason Momoa) through various video feeds while infiltrating a Lexcorp/CADMUS facility.

Here’s how HH described it, with additional reporting from Daily Superhero:

In the movie, there is a scene where Batman breaks deep into Lexcorp/Cadmus and manages to hack into the Lexcorp computers. Batman brings up surveillance footage on the monitors which shows the following:

Ezra Miller's The Flash is a blur that stops a robbery. (UPDATE: Previously reported on Daily Superhero. Apologies for oversight)
Jason Momoa's Aquaman is held prisoner in a containment chamber where we see his hand slap against the glass.

Aquaman’s imprisonment raises several questions on what connects King of the Seven Seas to DC’s other films, Man of Steel and Suicide Squad. Some theories posit that the Squad captured Aquaman on-assignment, while others think that Man of Steel’s events may have led the Sea King to attack members of the surface world. But until official details surface, it’s best to leave it as conjecture for now.

Flash And Aquaman Cameo Details In Batman V. Superman Rumored To Be Revealed