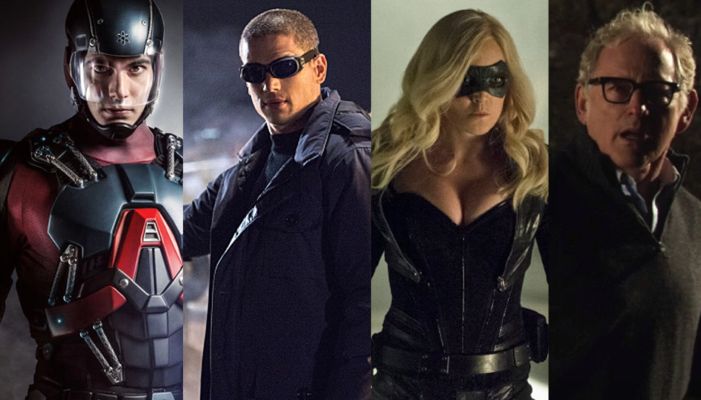 All those fan wishes for a CW-based Justice League may be justified after all.

Deadline is reporting that a new DC Comics series is in the early stages of development, featuring The Atom, Firestorm and Captain Cold -- as well as Caity Lotz in an as-yet-undisclosed role (but probably Canary) and three DC superheroes who haven't appeared on television before.

Behind the scenes, the series would be ordered straight to series, likely for midseason next year, and would be executive produced by Arrow and Vixen's Marc Guggenheim with Arrow, The Flash and Supergirl's Andrew Kreisberg and Greg Berlanti.

The upcoming, eighteenth episode of The Flash will see Brandon Routh's Ray Palmer (The Atom) cross over with The Flash for the first time, bringing along Felicity Smoak from Arrow to do so. Captain Cold, meanwhile, has been The Flash's most recurring villain. The last time Firestorm showed up, in last week's "Fallout," he left to head to Pittsburgh, where his first solo series took place in the comics.

How Canary would figure into a series is hard to say, since Caity Lotz's character on Arrow died at the start of Season Three. She has returned in flashbacks, but what device would allow for enough flashbacks to make her a recurring or regular on a new series isn't immediately clear. That Robbie Amell isn't mentioned but his co-pilot in Firestorm Victor Garber is, it's theoretically possible this series could take place in the past and deal with these characters' interactions before they became superheroes, but that seems farfetched, especially since it would preclude crossovers with Arrow and The Flash.

In a recent interview with ComicBook.com, Robbie Amell said that while nothing was final yet for Firestorm to reappear on The Flash, he had heard rumors.

"They haven't made anything official but it sounds like I'll be back for the end of the season," Amell said. "And if what they're telling me about comes to be, it's going to absolutely blow people away."

It's unlikely they could use the name Justice League given the fact that there's a live-action movie in development by that name -- but given the fact that the first Arrow/The Flash team-up featured the title "The Brave and the Bold" and the first Atom/The Flash team-up was called "All-Star Team-Up," it's not entirely unlikely the series will take on a classic title from DC Comics history.

This series is reportedly the same one -- then billed as an Atom spinoff -- that was mentioned by CW chief Mark Pedowicz at the Television Critics Association recently.