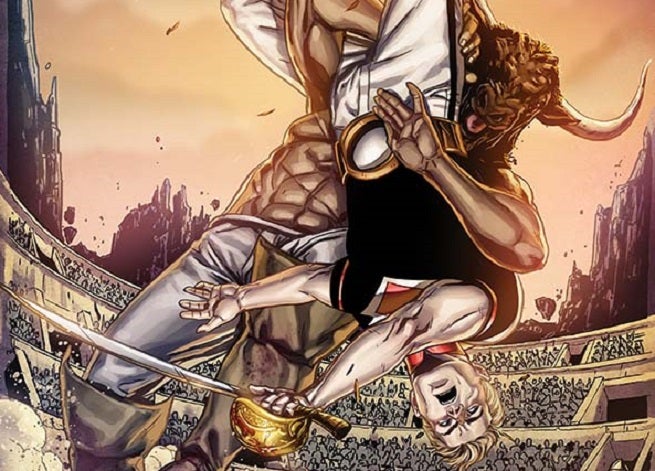 Let me get this straight right off the bat, I really enjoy this series.

Every issue, though imperfect, has had a lot to love. The art and coloring are near perfection, and the writing sparkles for the most part. I would honestly recommend this series to anyone. Frankly, I hope the team of Jeff Parker (writer), Evan "Doc" Shaner (artist), and Jordie Bellaire (colorist) remains on this title for a long time. Each issue of this series has been a compelling mix of spectacular visuals, epic world-building, a classic aesthetic, and high-flown adventure.

Still, my biggest problem so far is magnified in this issue and it comes in the form of the series' titular hero. But I'll get to that in the breakdown… Watch out for SPOILERS!!! 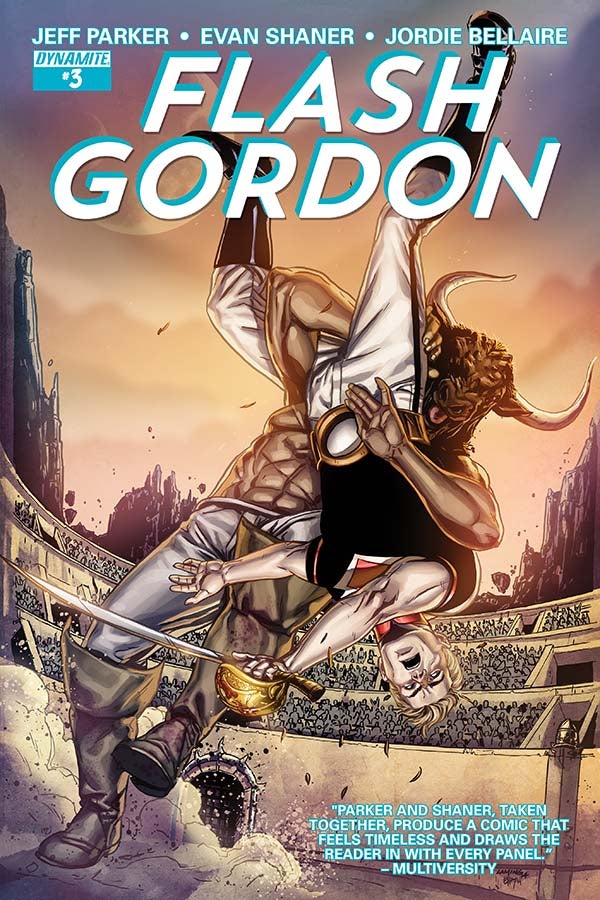 At the risk of becoming a broken record, I'll once again make it clear that the artwork here is stunning. To put it succinctly, Doc Shaner does some spectacular work here. I love his overall style and it fits this book perfectly. His poses and expressions are dynamic, creature design is a delight, and the fight scenes in this issue are engaging and very well rendered. As far as the coloring, Jordie Bellaire is continuing to add texture and richness to the visuals in a way that is perfectly complementary of Doc's contribution.

Everything I've said praising the art in past reviews applies here and rather than go into another protracted lecture on the subject, I'll just call out some moments and specific designs that really worked for me. Apparently, Ming has a pet which happens to be a cross between an owl and a tiger. Don't ask me why but I get a kick out of that design. It's actually kind of cute and it's a great little touch just having it lounging next to the Mongori menace emoting in its own way. In the same scene, I really enjoy the look of Mongo's red telecommunications system. Doc's rendering of the characters through shading combined with Bellaire's textured reds makes this an interesting and visually engaging communications method. It's distinct and helps to add to the flavor of this world.

Perhaps the most jaw-dropping moment is the reveal of Arboria's gladiatorial arena in a single big, beautiful panel. The wide shot, showing several ships flying to the arena and a cloudy vista in the background, is breathtaking. The design of the arena itself is relatively simple but with personality and panache. It's a particularly nice touch seeing the Arborian vegetation growing on it and the ships themselves are visually striking. Bellaire really shines here though working with light and color to bring the scene to life and making the cloud banks into something lovely with gradually shifting yellow into orange. Another perfect marriage of art and color comes later when the team is tasked with rendering dark blue silhouettes of gladiatorial combatants talking smack against the night sky.

This brings me to the fight itself which is energetic and engaging. Doc does some excellent work here and his beast warrior designs are fantastic. From buffalo-men to armadillo-men all the way to crab-men, this section is a feast for the eyes. Flash's fencing is also beautifully captured in a series of shots winding its way down a page and showing him dispatching multiple beast men handily.

Now it's time to discuss the writing. With one major exception I really like what Parker is doing here. There's a good bit of world-building going on establishing Mongo's system of rule and cyborg minions. On top of that, the plot is engaging and hangs together very well. I think I can see the direction that this is taking and I'm excited to see where we go from here. In this issue, Flash is captured, thrown into a gladiatorial arena, and has to fight for his life against Ming's beast men. At the end of last issue, Flash jumped into action to try and stop the beast men conversion process and in this issue is shown saving two characters after being turned into beast men but before their minds could be tampered with. As a result, we now have the beautifully designed lion-man Thun and a currently unnamed Rocksteady-ish rhino-man. With the way this issue ends, I can't wait to see what promises to be future issues full of revolution and revolt against Ming with our steadily growing cast of rebels.

Character-wise, there's a lot to love here as well. I'm enjoying reading Ming in particular in this issue and his icy cold logic really helps to convey his merciless nature. Additionally, Zarkov's know-it-all brashness provides a perfect excuse for him to play narrator and explain Flash's strategy in the arena as well as provide exposition justifying his advanced fencing ability. Honestly, as corny as it might have come off, I do appreciate Flash's initial plan of attack in the arena and Zarkov's explanation of it. Given that the beast men are somewhat simple-minded as a result of their conversion it makes even more sense for Flash to approach the problem of surviving against so many adversaries using the method that he selects. I'm not going to spoil that method here but think of an earth combatant who styled himself "the greatest" in his particular field… or perhaps I should say "ring."

This brings us to my only real problem with this book, Flash Gordon himself. I mentioned in the review of #2 that compared to Dale Arden and Zarkov, he really seems like something of a cipher. This is particularly problematic as lacking strong characterization, he's coming across as somewhat contradictory here. I tried to hint at the strongest sense I'm getting for the character in the title I gave to this review. What I mean by that is that if one takes Flash's unthinking leap into the beast men conversion machine, his merely bemused "Gross" at being stopped in that effort by restrictive foam, his use of the terms "sup" and "bro" when he says "Sup Ming. Sorry about your eye, bro," and his almost criminally bad fencing pun of "More like Flash Swordon," one begins to get a picture of a rather meat-headed leading man lacking gravitas. I'm honestly not sure if this is the best "look" for Flash as with my limited understanding of the character I thought him to be a more earnest adventurer with a more active mind.

It could be argued that this is a young Flash who has to grow into that character; however, that really isn't being conveyed. This series started in medias res and the reader hasn't really been given a lot of cues as to just how green Flash is in the heroing business. I mentioned earlier too that his characterization is contradictory. While on the one hand, he's projecting an untested and unthinking thrill-seeker, he seems inexplicably competent in some areas or at other times. His physical prowess, fencing ability, and general fighting ability are honed to the point of near-perfection which suggests sufficient experience with this sort of life that his character should also be more developed. This is further bolstered by his articulate speech and clever strategy at the beginning of the gladiatorial bout.

Perhaps I'm reading too much into things but at this point I desperately want to know who Flash really is. A couple of pages of him having an honest heart-to-heart with Dale or Prince Barin couldn't come soon enough for me. I'm not asking for one Flash over any other, but I do want to know who I'm dealing with in some meaningful way.

I honestly don't have much to say here. Would it be churlish to point out that the appropriate punctuation mark after Flash's, "Sup Ming," really ought to be a question mark as opposed to the period which is currently being used? Also, without wishing to give offense to the current cover artists, can Doc and Bellaire do a cover? I'd like to see what they would come up with as some of the current ones have left me a little cold.

Aside from that, I'll keep beating the dead horse of this book's T+ rating until it changes to something more appropriate or something in the actual story justifies it. Sure, Flash gets stabby and Rhino-Man horns an ape-guy in the back, but that wouldn't justify that rating as far as I'm concerned. If this book isn't appropriate for all ages, then it's still appropriate for more people than T+ would suggest. From what I can see, there is absolutely nothing in this book to justify that rating except maybe an ad for Jennifer's Boobs… Oops, I meant to say Jennifer Blood.

I highly, highly recommend this book. Despite the problems I have with the titular hero, it is well worth your time, attention, and hard-earned dollars. Do yourself a favor and pick up a copy today!