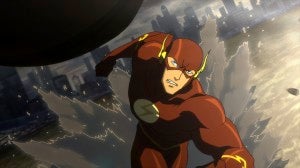 Not long ago, Geoff Johns and Andrew Kreisberg left Justice League of America's Vibe in close succession, saying nothing about why, and different readers had very different reactions. Some felt that the big-name, big-price-tag talent was simply deserting a book that had little chance of selling enough to justify keeping them on, while others suspected the pair had a project in the works together. Lending some credence to that last thought was the fact that Johns's friend Sterling Gates took over the title, presumably giving Johns a bit of a window into the process and a backdoor way to keep an eye on the series (although that's far from guaranteed; it could just be that Gates was available at the time). It now appears as though the pair may have left Vibe to work on The Flash together for The CW Network; they're introducing the character in a season two episode of Kreisberg's Arrow and will use him a couple of more times throughout the rest of the season before he gets a "backdoor pilot" in the season's twentieth episode, leading into what the network hopes is a new series in the fall of 2014. 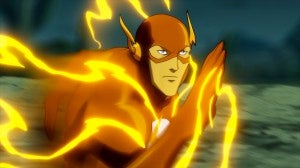 "When we first meet Barry Allen, he's just a forensic scientist...an ordinary man," Kreisberg told Green Arrow TV. "Part of the fun for the audience...is to see how we view our Arrow take on the Flash legacy. Some of it will feel very familiar to DC Comics, some of it hopefully will feel different, fresh and exciting. The same way we approached Arrow is the same way we're approaching Barry." The showrunner added that while Barry's Flash-iness is a violation of the tenet that there wouldn't be anybody appearing on Arrow with fantastical powers, it will be justified in-story. "There will be extraordinary events in the world and the characters will react in the same way," Kreisberg said. "There's something more relatable about Barry among of the Big Seven of the Justice League," he added. "He got his powers by accident; he's not a god, he's not an alien … his reactions to that feel very … human and grounded." It's unclear whether by the "Big Seven," Kreisberg is referring to the classic big seven, including Martian Manhunter, or whether he's referring to the current Justice League, which has eschewed that character in favor of Cyborg. It's also not clear whether such a distinction would matter. "Oliver Queen is very dark and tortured soul and Barry is not," Kreisberg said. "He's a great character who is going to affect all of our characters' lives. It will be fun to see these two characters together because they have two different worlds." "We're also exploring a very personal story for Barry, life as forensic scientist and the people around him, the tragedies and how he deals with them in a very different way than Oliver Queen," DC Comics Chief Creative Officer Johns said. Johns, who has written The Flash--either in his solo comic book or on a Justice League team--for years reiterated that the costume will make an appearance, and that Flash won't be trying to work around the tropes of superhero storytelling, as both Arrow and Smallville have done on the network. "No sweat suits or strange code names; he will be The Flash," Kreisberg said. The article says that practical concerns like how to depict the character's speed-based powers are still being batted around, because they want to do something interesting and different rather than depicting super-speed in the same way it's been played onscreen more or less since the first Flash TV series almost 25 years ago. "It's not what people expect," Kreisberg said. "We want to do something fresh, new and exciting and give people a real cinematic experience the same way we did with Arrow." The series will likely see an influx of a small supporting cast for Barry Allen, who will leave with him when he goes off to his own show, unless they don't develop one for him until his pilot, which is equally likely. In any event, don't look for any existing characters to leave Starling City to join up with the Scarlet Speedster.