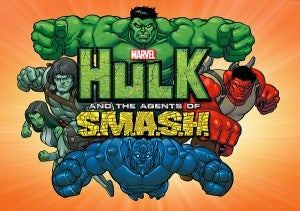 Disney XD and Marvel have released a new preview of the forthcoming seventh episode of Hulk and the Agents of S.M.A.S.H., in which Swiss Family Hulk spends a day mini-golfing before, as you might expect, things start to go all sideways and things have to be smashed.

You can check out the preview, as well as the teaser text, below.

Marvel's Hulk and the Agents of S.M.A.S.H.

The Hulks go out for a round of mini-golf to celebrate A-Bomb's birthday only to find themselves face to face with one of their most dangerous enemies – the Leader! But before the battle begins, the Leader shrinks the Hulks down, to miniaturized Hulks. Now the one-inch heroes face new obstacles and challenges to stop the Leader before he succeeds in shrinking down every city on Earth.

Fore! Hulk and the Agents of S.M.A.S.H. Hit the Links