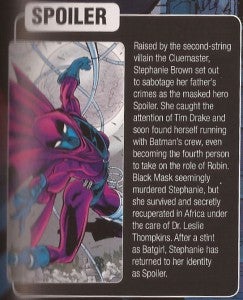 In spite of having come out more than a month ago, it took until now for anyone (in this case Bleeding Cool) to unearth an interesting piece of trivia found in the back of a new DK Children book, Batman: The World of The Dark Knight.

The book, which is essentially an Encyclopedia Batman-ica and which apparently is pretty up-to-date, including charactrs like Talon who have just started to appear in the comics, also features a pretty interesting write-up on Spoiler, also known as Stephanie Brown, a heroine who's done time as both Robin and Batgirl in recent years.

"After a stint as Batgirl, Stephanie has returned to her identity as Spoiler," reads the entry (shown at right). Since nobody has seen her since she was last Batgirl, and neither Spoiler nor any other identity of Stephanie's is accounted for in the world of the New 52, that's an interesting twist for her fans.

Since the Batgirl series by Bryan Q. Miller evaporated and Stephanie was replaced by a no-longer-disabled Barbara Gordon in the relaunched title, her fans have wondered what would become of her, and been extremely vocal about it, even launching a campaign to send waffles to the DC Comics offices to remind him that people are thinking of the character.

That enthusiasm only grew after Miller, who now writes Smallville Season Eleven for DC, first announced that she would be introduced into that series as Nightwing, and then had to walk the statement back when DC editorial opted to put Barbara Gordon in that role, as well. DiDio was recently quoted on Facebook as saying that the character "doesn't exist yet" in the world of the New 52.