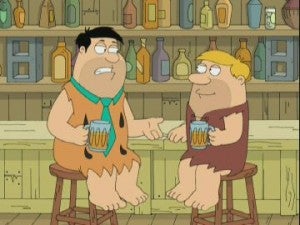 According to a report in the May 4 edition of The Hollywood Reporter, Seth MacFarlane's planned 2013 relaunch of beloved primetime cartoon The Flintstones has been scrapped, the production offices emptied and the entire property is "on life support." All of this is the result of Fox President Kevin Reilly, who reportedly told MacFarlane upon reading the pilot script that he "likes it but doesn't love it." Fearing a high-profile failure that could be damaging for Fox's credibility as well as the Flintstones brand, Reilly apparently felt that the project had to be pitch-perfect in order to keep moving forward, even after the network spent two years wresting the rights to the series away from Warner Brothers. Fox reportedly gave MacFarlane two options: go back to the drawing board with the script, or put the project on hiatus. MacFarlane chose the latter, reportedly because of his many other commitments (currently: three animated series at Fox, a feature film, a record deal and an educational science show. The result was that the other people hired to work on The Flintstones were let go, with six of them being fired outright and MacFarlane's writing partner being bought out of his contract for an undisclosed sum. According to THR, MacFarlane hopes that he can put some of those fired to work on American Dad! when and if the show is renewed next year. It's perceivable, especially considered the property's potential upside and all the work Fox did to acquire it, that The Flintstones could be coaxed back to life at some point, but for now it appears as though it's in development limbo and unlikely to emerge.