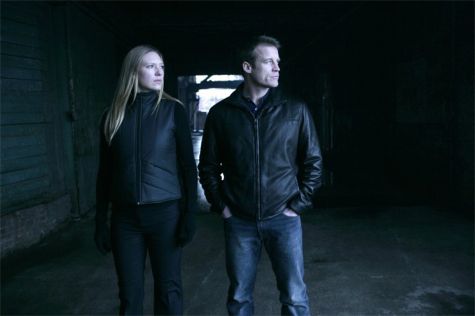 For Fringe star Anna Torv, art imitates life. A representative of Torv, who plays Agent Olivia Dunham on the hit Fox series Fringe, admitted that the actress secretly wed co-star Mark Valley. On Fringe, Valley plays Agent Scott, the shadowy partner and secret lover of Agent Dunham. Agent Scott was revealed in the show's pilot to be a double agent, who was selling US secrets to an undisclosed cabal who is using the general populace as guinea pigs for their fringe science experiments. Scott, who found himself accidentally turned into one of those experiments, joined consciences with Agent Dunham during her attempts to save his life. Agent Scott's life was saved, only to die in a car crash after Agent Dunham discovered that her partner was living a double life. Throughout the season of the show, Agent Scott has returned to Olivia as a ghostly imprint of the linked conscience they once shared. On the most recent "The Transformation" episode of Fringe, it was revealed that Agent Scott was Black Ops, so he really was one of the good guys after all. Torv's rep revealed to E! Online that the couple had wed sometime last December in a secret ceremony within days of Valley's 45th birthday. Torv and Valley's relationship started during production of the before-mentioned pilot last summer. No word as to whether their shared conscience contributed to their romance! Photo: FOX/Craig Blankehorn