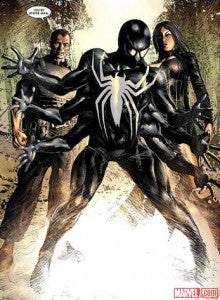 As we previously informed you a couple of weeks ago, Marvel's hit series Thunderbolts, about a group of villains serving time by going on dangerous missions for the government, is undergoing a makeover.  The title is changing over to Dark Avengers with the 175th issue of the series coming to stores this week.  We gave you a quick rundown of the roster change previously, but here's the more in-depth report about who these characters are, with a little help from our friends at Marvel!

Luke Cage will once again be leading this group of rouges, but he'll get some familiar and evil faces, some of which he was just trading blows with in the pages of New Avengers.  According to writer Jeff Parker, "He is not happy at the beginning of this arc. These Dark Avengers characters have messed with his personal life, something he is incredible protective of. It’s not a good mix."  Parker sees a chance with this new team to tap more into the roots of Cage's past, when he himself wasn't always on the straight and narrow.

Other members of this bag o'villainy include mega powerhouse Skaar, the son of Hulk.  An alien refugee, he recently turned against several of his teammates in a battle with the Avengers, and now he's onboard to help with the management of the team.  Series artist Declan Shalvey is looking forward to drawing the figure, stating, "It’s an interesting take on The Hulk. They’re always known as brutes and monsters; Skaar is a fighter, but he is primarily a warrior. Drawing a Hulk interacting with something like that huge sword changes his physicality in a big way, for me.  Joining Skaar is Toxic Doxie, a Norman Osborn loyalist, she is a specialist in chemicals and biology, which she's used to craft herself  persona very similar to that of the Scarlet Witch. 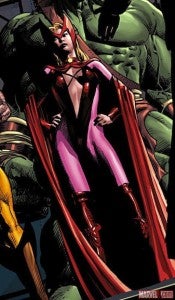 Interestingly enough, Toxic Doxie has a connection of sorts to Dark Spider-Man, and he's a bit different than the average baddie. He is Ai Apaec, a South American deity who gained new powers thanks to Norman Osborn.  "He is not comfortable around these people. He is very reserved and doesn’t talk a lot, so it’s not easy to tell what he thinks," said Parker, "I don’t think he relates to anyone, really. He thinks of himself as a force of nature."  Shalvey mentioned how even drawing the character creates a sense of the surreal.  "I’ve tried to draw Dark Spider-Man as being very different from the rest to show how different a creature he is and to emphasize his “otherness.” He walks and crawls around in a very creepy and alien way. He uses all his extra arms just as much as his bipedal “lighter” counterpart uses his arms and legs."

Last but far from least is Ragnarok, a clone of Thor thanks to the minds of Reed Richards and Iron Man that was used as a weapon against the anti-registration heroes during the events of Civil War.  Parker describes this character as the one that Cage certainly does not want around.  Really though, how many heroes could stand up to the task of trying to keep these criminals in line?  Luke Cage is certainly up for the task, so don't miss this issue of a new era!

From Thunderbolts to Dark Avengers: An In-Depth Roster Analysis