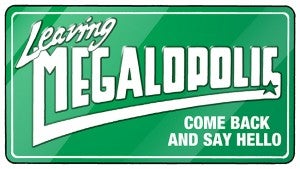 It's a team up of excitingly talented proportions in the world of comics, and it's between two of the more respected writer/artist combos around.  Writer Gail Simone (Batgirl, Secret Six) and artist Jim Calafiore (Secret Six, Gotham Underground) have gotten together once again, this time with a joint Kickstarter campaign to publish an original story called Leaving Megalopolis.  This will be the first Kickstarter campaign for either creator, and the book's synopsis, as well as the special offers to those who sponsor the project, are sure to make it worth the donation. Leaving Megalopolis starts with an interesting premise:  what if all of the superheroes who protect and maintain the safest city on the planet all suddenly became murderous, rampaging killers?  This 80-page special will explore just that premise, as a small group of survivors will try to test their limits against the superpowered.  It promises to be a tale of action, violence, and human drama.  For fans of Simone and Calafiore's work on the DC hit book Secret Six, Leaving Megalopolis is not to be missed, as it will have the same surprising twists, fully developed characters and rich art as the original series did. Those who donate past certain dollar amount thresholds will receive exclusive goodies, ranging from computer wallpaper of the comic up to having themselves and a loved one drawn into a panel of the comic.  Even original artwork is available for certain donation amounts.  Just for donating even a dollar, you will get a mention in the thank-you page of the book.  Check out the link to the Kickstarter project here!

WWE 2K23 WarGames and 2K Showcase Impressions: Off to a Fantastic Start