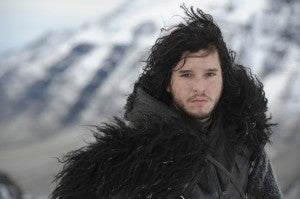 A new Entertainment Weekly story (reported via Collider) about the upcoming third season of HBO's Game of Thrones includes, among other things, a list of characters and a general look at the scope of the season, which will tell the story of the first half of George R. R. Martin's third Game of Thrones novel, Sword of Storms.

Even after introducing nearly a dozen new characters in the article, though, showrunners David Benioff (who has some experience dealing with big groups as a co-writer on the X-Men films) and Dan Weiss gave a statement acknowledging that the burgeoning cast can sometimes make the show impenetrable to new viewers.

“It’s important to point out that that we have the largest cast on television right now," they said. "We introduced dozens of new characters in season two. If you hurl 300 characters at an audience, the story collapses under the weight of too many faces, too many names, and too many subplots. We need to be just as mindful of the audience members who have never read the books as we are of the readers; the series will fail if we only appeal to those who already know the characters. So we try to be parsimonious about how many new roles we introduce to the story and when we introduce them.”

The list of new characters, per the Collider piece, is as follows: