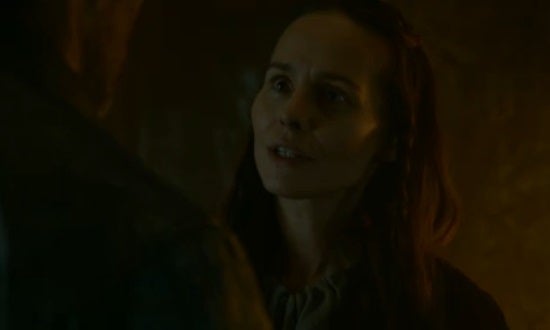 According to E! Online, we’ll be learning a little more about Selyse Baratheon, the wife of would-be king Stannis Baratheon, on tonight’s episode of Game of Thrones:

We learn more about Stannis' family...especially his slightly eccentric (for lack of a better word) wife, when they sit down for a dinner with Melisandre. Awkward. And the final scene will be one of the series' most-talked about moments EVER.

For those of you who want to know more now, here’s a quick bio on Selyse, based on how she is portrayed in A Song of Ice and Fire.

Selyse was originally a daughter of House Florent. She is described in the books as not being particularly attractive, with a growth on her upper lip and large ears, and has a stern, cold demeanor and tone of voice.

Selyse married Stannis, but the two aren’t particularly fond of each other. At their wedding, Robert Baratheon slept with one of Selyse’s virgin relatives on the wedding bed prepared for the newlyweds. The eventual result was one of Robert’s many bastard sons. Because of this, Selyse believes she and Stannis are cursed to never have sons. So far, the curse has proven true. The only living offspring of their marriage is Shireen, a daughter afflicted with Greyscale.

Selyse is an even more fanatical believer in R’hllor, the Lord of Light, than Stannis is. She is the most fervent supporter of Melisandre and stands behind everything the red priestess does.

The bonds of marriage proved strong when Stannis made his claim for the Iron Throne. House Florent backed Stannis in the War of Five Kings and Selyse’s brother became his hand, but all of that came crashing down after the Battle of the Blackwater.

Game of Thrones: Who Is Selyse?