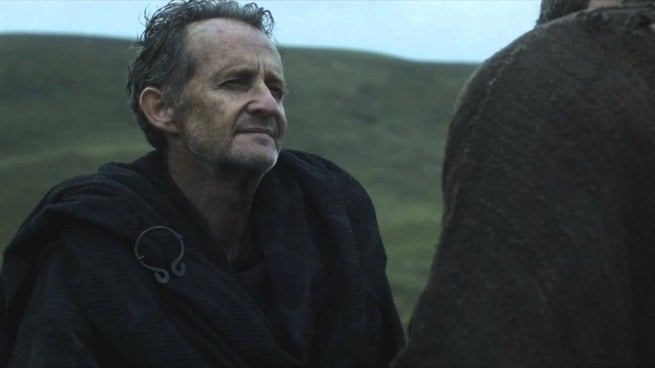 SPOILER WARNING For the Game of Thrones Season 5 finale.

Tonight’s Season 5 finale of Game of Thrones will likely introduce a significant new character to the cast, named Ser Robert Strong. We can’t guarantee he appears in the episode, but he’s certainly been hinted at earlier in this season. Who is this mysterious new figure? Read on to find out.

According to novel A Dance with Dragons, Ser Robert Strong is a huge man in a hulking suit of white armor. According to Qyburn, who introduces the character as a member of the Kingsguard, Strong has taken a vow of silence, refusing to speak until all of King Tommen’s enemies are driven from the land. Thus, no one has ever heard him speak, nor seen him use the privy or take food or drink. Strong is becomes the chosen champion who will fight for Cersei in her trial-by-combat, and carries Cersei into the Red Keep after her walk of atonement.

Several characters in the books, and most fans who read them, believe that it is actually the reanimated corpse of Gregor “The Mountain” Clegane inside the armor. The most obvious evidence to support the theory is simply the size of Strong. He is the only character to come close to rivaling The Mountain’s massive frame, and there’s probably good reason for that.

Additionally, Qyburn was previously said to have lost his maester’s chain because he probed into dark areas of study, including necromancy, and used humans for experimentation. The Mountain’s corpse was given to Qyburn for study after the combat with Oberyn Martell. The fact that he’s undead would explain why Strong seems to have no bodily needs. In the books, the head of Gregor is sent to Dorne as a gift. The fact that nobody has seen Strong without his helmet seems to hint that maybe there's no head underneath.

Game Of Thrones: Who Is Ser Robert Strong?