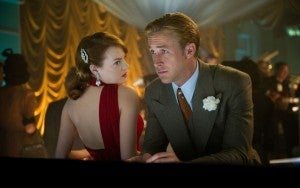 Warner Brothers has reportedly decided to shelve Gangster Squad, the new Mickey Cohen biopic from Justice League writer Will Beall, until reshoots can be made to remove a pivotal scene in which criminals get into a gunfight with police officers in the audience of a theater.

The move follows Warner pulling the film's trailer from theaters. It had been playing with screenings of The Dark Knight Rises, following last week's mass murder at a screening of the film in Colorado.

According to The Hollywood Reporter, the scene was appraently important enough to the plot that substantial reshoots will be needed on the film, which stars Sean Penn, Josh Brolin, Emma Stone and Ryan Gosling.

Some moviegoers are likely to be critical that shifting the fim's release date, or even editing the film, will accomplish anything, but Warner Brothers has been extremely sensitive to the tragedy in Colorado. One of the survivors just filed the first lawsuit relating to the incident, naming Warner Brothers as one of the defendants on the grounds that The Dark Knight Rises was a violent film and may have inspired the shooter.

A number of movies that were similarly delayed after September 11's terror attacks, including Arnold Schwarzenegger's End of Days and an adaptation of Dave Barry's novel Big Trouble, failed to perform at the box office when they finally were released. Spider-Man, on the other hand, was obviously pretty successful after it was sent back for reshoots to remove an iconic image of the World Trade Center being used as to capture a small aircraft in Spider-Man's webbing.