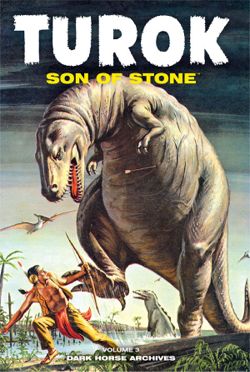 In some great news, Dark Horse has announced that they will soon be publishing the new adventures of former Gold Key comic characters Turok, Doctor Solar, Magnus and Mighty Samson. What’s more is that comic book legend Jim Shooter will be teaming with Dark Horse to re-introduce these characters. As long time comic book fans know, Jim Shooter spent nine years at Marvel Comics. Some of his highlights at Marvel include Chris Claremont and John Byrne’s run on the Uncanny X-Men, Frank Miller's run on Daredevil, and Walt Simonsen revamping of The Mighty Thor. After his time at Marvel, Shooter launched the Valiant Comics line. Jim Shooter will be joining Dark Horse as head writer for the re-launch of the Gold Key Comics characters: Turok, Son of Stone , Doctor Solar, Man of the Atom, Magnus, Robot Fighter, and Mighty Samson. Dark Horse promises to announce more characters and new comic writers shortly. “It's great to be at Dark Horse, working with Mike Richardson, world-class creator, honorable gentleman and industry powerhouse” said Jim Shooter. “It's great to be reunited with Magnus, Solar, Turok, Samson and the other wonderful Gold Key properties. The opportunity is tremendous and the time is ripe. Let's do it.” “Jim and I share a great affection for these terrific characters. We have some very exciting ideas on how to introduce them to a whole new generation of fans.” said Mike Richardson, who is president of Dark Horse Comics.