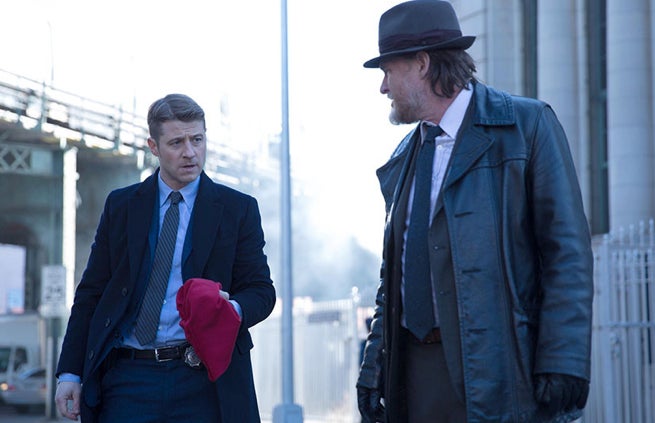 "Red Hood" opens with a gang storming a bank for a heist. But before the group enters, one of their members covers his face with a red hood. One of his compatriots asks what he's thinking. The red-hooded thug says he just wanted to "spice things up." They all enter the bank and proceed to rob it. Th enamel the red hood quickly takes control of the heist, jumping atop a counter and barking commands at all of the bank's visitors.

One of the bank's tellers pushes the silent alarm. Then a security guard quickly pulls out his revolver and tries shooting the red-hooded thug. He misses however, sending the red-hooded thug into a cackle. The gang leaves the bank, but are cut off by the police. The Red Hood quickly creates a diversion by unloading one of their money bags into the street of Gotham, causing a frenzy amongst the city's cash hungry citizens. With the police distracted, the gang escapes.

Later, Gordon and Bullock investigate the crime scene at the bank. Gordon looks over the bank's surveillance footage, taking notes. A bank teller in the room says that she though the Red Hood was nice, and compared him to Robin Hood for giving some of the money back. Gordon asks if any other unusual activity occurred in the days leading to the robbery. The bank teller reveals that a small smoke bomb went off a few days prior, but they wrote it off, thinking it was a kid's prank.

That night at Wayne Manor, Alfred receives a house visit from an old friend named Reggie. The two haven't seen each other for twenty years. Reggie is currently a homeless man with no where to turn, despite working for the British secret service alongside Alfred years before. The two catch up, but Alfred asks Reggie how he fell off the wagon. Reggie says that the years weren't kind to him, which led him to becoming an alcoholic. Bruce cuts Reggie's story short by entering the room, but invites him to stay for a few nights.

Elsewhere, Fish Mooney is escorted to a room in Arkham Asylum, where a mysterious man sitting behind a desk asks her to take a seat. The man accuses her of creating "all of the fuss" in Arkham's basements recently. Mooney says that she'll only talks to the facility's owner, a man the manager calls "The Doctor," (later named as Dr. Dulmacher) but the man insists that he settle the matter with Fish instead. Playing nice, he offers her a shower and a fresh set of clothes. Once she freshens up, he says, they can talk again.

Over at the Gotham City Police Department, Gordon reviews the robbed bank's security footage, finding one of the men from robbery setting off the smoke bomb. Gordon sees the perp wearing a shirt that says "Kleg's Auto." Sure enough, the gang is hiding out at Kleg's Auto. There, the Red Hood celebrates his rise as a media sensation. He officially declares the group the Red Hood gang, saying that they should keep stealing from the rich and giving to the poor. The rest of the gang doesn't like the idea. The gang's leader then shoots the Red Hood down, and takes the Hood for himself.

At Penguin's club, it's a slow night for Oswald's business. The bartender reveals that they've run out of alcohol. The business can't get any more booze shipped in, Butch says, because Maroni controls the traffic of alcohol on this side of Gotham. And since Maroni hates Oswald, he's withholding his supply.

Gordon and Bullock later storm the Red Hood's garage hideout. There, Bullock asks what is going on between Gordon and Leslie Thompkins. But the goading is cut short when Bullock finds the dead Red Hood member stuffed in the fridge. But as the two investigate, the Red Hood Gang launches another bank heist across town. The bank visitors ask the Red Hood to share the loot again, which he does.

At GCPD, a witness comes in. He tells Gordon and Bullock that he saw the Red Hood earlier that morning, unmasked. They take the witnesses description of the man, look for suspects.

At Wayne Manor, Reggie spars with Bruce in a training session. Reggie takes Bruce down. He teaches Bruce to hit as hard as he can, finding anything he can to find an advantage. Alfred disrupts the "alternative" lesson, and tells him that discipline and skill are better than being advantageous. Reggie apologizes for pushing Bruce, while Alfred explains to him how challenging it is to raise Bruce.

That night, Penguin tries jumping one of Maroni's liquor shipments, but the police show up before they can. Then Butch shows up and says that he staged the police raid. With Butch, Penguin takes the liquor.

The next morning, Barbara and Selina Kyle talk. Barbara, drinking, says that she likes having Selina and Ivy around. She says Selina could be a much better person underneath all the grime and grit. Barbara offers them both her wardrobe, saying they need more than she does. Barbara tells Selina that she can use her beauty to her advantage, and that her looks are as powerful as any knife.

At the GCPD, Gordon and Bullock form a lineup of suspects who match the witnesses description of Red Hood. The witness identifies one of the men as The Red Hood. Bullock's ready to book them, but Gordon decides to let him go so they can trail him back to the rest of the gang instead.

Refreshed, Fish and the man at Arkham continue their negotiation. Fish tells that man that they can't keep stealing body parts from the basement, but the man says that the doctor needs them for his "experiments." The man becomes very threatening, then. He gives Fish an ultimatum, saying unless she gives her eyeballs to the doctor, her friends in the basement will die. Fish then scoops her eye out and squashes it with her foot. Gross.

At Wayne Manor, Bruce offers a bottle of wine to Reggie and Alfred. The two adults share a glass, but Reggie begins abusing it by drinking rather quickly. A few bottles in, Reggie and Alfred share war stories from their days in the special service. Reggie reveals that he and Alfred only had one failed mission, where Alfred once killed 12 men at once. Alfred cuts the revealing anecdote short though, and sends Bruce to bed. Reggie asks Alfred why he's hiding his murderous past from Bruce, which Bruce overhears. Alfred tells Reggie to leave the following day.

Gordon and Bullock follow their Red Hood suspect to his apartment. Inside the apartment, the Red Hood wearer is ambushed by another gang member, who wants the Red Hood for himself. He thinks the Hood holds power and influence. When the Red Hood refuses, the other gang member shoots him. Hearing the gun shot outside, Bullock and Gordon rush in. They miss the shooter, but find the former-wearer alive. Gordon goes through the man's paperwork, where he finds rejection letters for loans from the banks that the Red Hood Gang robbed. Gordon concludes that the robberies are revenge robberies. In the paperwork, they find the gang's next target.

At Penguin's club, now reinstated with booze, Penguin and Butch toast to no longer "being sidekicks." Penguin asks Butch if he misses Fish, admitting that he does. Butch doesn't feel the same way, saying that Fish got what she deserved.

Meanwhile at Wayne Manor, Alfred catches Reggie stealing from the Manor. Reggie admits that he's in "real trouble." He then stabs Alfred and leaves him to die. Bruce quickly finds the wounded Alfred and calls 911.

The next morning, the Red Hood gang tries robbing their next bank, but are stopped by the GCPD. The gang resists though, sparking a shootout in the streets of Gotham. Gordon tells his men to hold their fire, and then shoots down the Red Hood leader. With the man dead, Bullock says he needs a Danish. Gordon then receives a call from Bruce, updating him on Alfred's critical condition. Gordon rushes to the hospital, where he finds Bruce watching over his mentor.

Across town at Wayne Enterprises, Reggie is leading a board meeting. It turns out that Reggie was sent there on the board's behalf to gather intel on Bruce's investigations into the Board's seedy activities. With Alfred down, Reggie says, now is the time to make a move on Bruce Wayne.

Back at the scene of Gordon's shootout with the Red Hood gang, the discarded red hood lies in the street. A young man picks it up and puts it on.