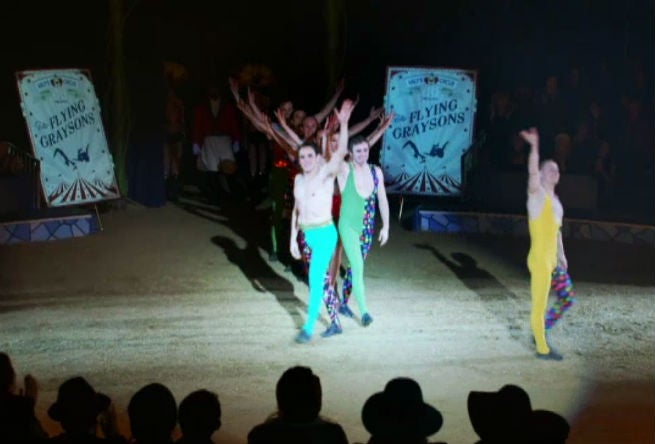 The episode opens on Bruce, sleeping on the couch in front of the fireplace with research on his lap.

Elsewhere, Oswald's mother is singing at his club, to a lukewarm reception to say the least.

In the area where Fish has been staying, she wakes to sounds of people crying and coughing; she calls their attention to her.

Barbara comes home, calling for Jim, but instead running into Selina and Ivy, who have been crashing at her place. She asks for Jim, and Selina says he dropped off his keys last week. Barbara sits on the couch with them, eating some of their cereal and asking who they are.

At the circus, Gordon and Thompkins watch the Flying Graysons perform. After they're safely on the ground, a clown car comes in. A drunken clown attacks one of the Graysons, resulting in a brawl between the two groups of performers. Gordon goes down to break it up.

Back at Oswald's, his mother finishes her set to modest applause. A drunk man at the bar boos her, and Oswald charges at him, splattering his blood all over the face of a bystander.

Back at the circus, Jim and Leslie are having a hard time getting the performers to say anything until John Grayson and his ex-girlfriend Mary start to bicker; their families have been at it for years, and apparently this time it has to do with a woman named Lyla, the snake dancer. Gordon and Thompkins go to her trailer, where they find her son Jerome. He hasn't seen his mother since this morning. Hes' worried that she's gone without any of her effects. The ringmaster cautions Gordon that Lyla is always off somewhere getting laid and will be fine, but Gordon tells Jerome to release Lyla's snake; it leads them to her body, hidden under canvas on the back of a truck. Immediately, Gordon realizes that the ringmaster knew the body was there.

The ringmaster assures him that they found her dead already.

Fish tells her new gang that they need to unite and rise up against their captors; she tells them that they have to do exactly what she says and that she'll save at least some of them, though some will die.

Near the river, the ringmaster takes Gordon to a spot where they found Lyla's body. He assures Gordon that they have their ways of punishing people within their own community.

Bullock enters to find the cast of the circus being brought in for questioning, curious about what's going on. Gordon pulls Jerome into an office to interview him. He asks about any enemies, and Jerome says ho. She also didn't have any boyfriends, just casual sexual relationships.

They take Lyla's lovers, the heads of the Grayson and Lloyd families, in for questioning, each one accusing the other.

When the captors come to take someone from Fish and company, she demands a concession in exchange. She tells them that she knows they need them alive to be organ donors, and that if they don't bring food and supplies to the prisoners to make life more livable, she and the mob will simply kill the person they want. He calls her bluff and she has a group of men beat "57a" to death. The men demand Fish comes with them to see the manager, but she refuses, hiding behind her muscle and telling them that she'll only go see him if one of his men stays behind in her place. He says they'll be back. After he leaves, the group cheers but Fish quietly pays respect to 57a.

At the police department, Nygma and Thompkins have determined that the time of death makes it nearly impossible for the killer to be either of the two family heads. Gordon says the rest of the potential suspects home, and then agrees to a date tonight with Thompkins. Before she can go, a blind man who claims to be a psychic from the circus enters, saying that he has a message from the other side. He offers a cryptic clue.

Gordon is dismissive of the psychic, who he assumes is in it for publicity, but Thompkins wants to give him the benefit of the doubt.

At Wayne Manor, Bruce continues to do research; Alfred comes in and warns him against meeting with the board of Wayne Enterprises, saying that it's likely dangerous, but Bruce's mind is made up.

At his club, which is still mostly empty, Penguin plays the piano.

Back at her home, Barbara is modeling outfits for Selina and Ivy, in the hopes of picking the right one to go get Jim back.

Over dinner, Thompkins has decided that she knows the answer to the clue the psychic gave them; they'll find something in the park under Arkham Bridge. Gordon wants to go in the morning, but she hassles him until he goes.

There, they find the apparent murder weapon; a hatchet with an incription on the handle indicating that The Hellfire Club, a satanic cult, is involved. The cult haven't been active for years, and Gordon figures out a theory. He calls the station to have two people brought in for questioning.

After a brief bit of flirting from Gordon and Thompkins, Gordon goes into a room where Paul Cicero, the psychic, is being kept. He tells Cicero that the hatchet was a clumsy ploy, planted evidence. As Cicero argues with him, Jerome is summoned in. Gordon asks if he knows why he's here, telling Jerome that he knows he killed his mother. He says that Cicero let him clean up in his trailer, and then told him to scratch symbols into the hatchet and throw it off the bridge. Gordon says he believes Cicero is Jerome's father.

Jerome says that his father was a sea captain who died at sea, but Gordon challenges him to name the ship and Jerome can't. Ultimately under threat of a blood test, Cicero admits that he's Jerome's father. Jerome is visibly shaken, but quickly recovers, laughing and then getting verbally abusive toward Cicero and his mother both.

He decides, equally abruptly, that he accepts Cicero's story. He says that he killed his mother for being a nag. He laughs maniacally.

Afterwards, Thompkins thanks Gordon for letting her into the hardest part of his job. The pair kiss passionately. While they're preoccupied making out in the locker room, Barbara comes looking for Gordon, and then turns to leave, upset.

At Oswald's club, Zsasz comes to see him; Falcone is disappointed by the way the club is running and Butch Gilzean, now tortured into glaze-eyed obedience, will help Penguin run the place.

At Wayne Enterprises, Bruce demands answers about how members of organized crime got possession of former company property at Arkham, and chemical weapons manufacture at Welzyn. The board isn't forthcoming, and he pledges to bring his concerns up at the next shareholders' meeting.

At the police department, John Grayson and Mary Lloyd are now engaged, having been reunited after their families reconciled a decades-long family feud when Gordon yelled at them over their bad behavior.

Back at the kidnap prison, the manager has agreed to see Fish in exchange for leaving one of his men behind. She leaves, taking the man's baton with her and flanked by his assistants with their guns.