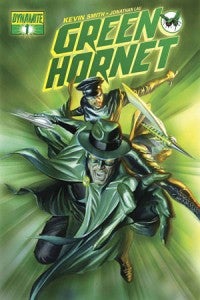 He's been one of those heroes that almost everyone has heard of, and he's had more staying power than a lot of heroes and super-powered figures of comic book history, but it may be safe to say that the Green Hornet is finally getting his due, and in multiple ways! Dynamite Entertainment is in the process of releasing several titles featuring the emerald avenger, each focusing on a different aspect or point in time with its own distinct writer and creative team. Green Hornet #1 kicks things off with superstar writer Kevin Smith helming the story with Jonathan Lau drawing. Ivan Nunes also contributes rich colors for this premiere issue, which wonderfully blends the early noir, Golden Age feel of the character with modern sensibilities and dialogue. Lau and Nunes set the scene for us early on, as a sleek car emerges from a secret hideaway, dialogue not needed as we encounter a tense meeting between Italian and Japanese mob families, both with opposing views on Century City's avenger, The Green Hornet. The meeting and eventual arrival of Green Hornet paints an interesting contrast, as the vintage look and feel of the dialogue between the clans is brought into a modern, quirky counterpoint with the hero's intervention. Smith's storytelling is sharp and wry, with Green Hornet's humor harkening back to the early days of Stan Lee's Spider-Man. He displays an effortless ability to laugh at the enemy as he and Kato, his ever-faithful sidekick, take out the mobsters with swift movements and a few cool tricks, which I won't spoil for you here! Nunes especially does a nice job of providing rich shades of green in this issue, which effectively play off the contrast between the dark seriousness of the criminal element and the plucky, effortless moves and wordplay of Green Hornet, and even Kato to a certain extent. The action sequences are laid out in a way that helps to carry the story briskly and with sharp lines and attention to detail. The series takes an interesting and unexpected turn upon the Hornet's return to his home with a wife and a child. What is the future of the Green Hornet? How will Green Hornet's son become an integral part in the legend and symbol of his father? All of these questions await answers in the upcoming issues of Kevin Smith's Green Hornet, which has firmly established itself as an interesting and engaging comic book that marries the pulp feel of Golden Age comics with a modern sensibility.

My Hero Academia Answers One of Its Special Pro Secrets