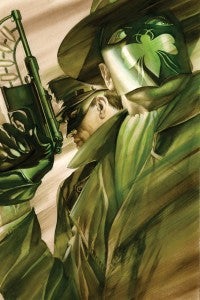 Dynamite Entertainment announced this morning that Mark Waid will take on a relaunch of Green Hornet in 2013, with covers by his Daredevil comrade-in-arms Paolo Rivera. No interior artist has yet been announced for the series, which will be titled Green Hornet and Kato, but will come this weekend at New York Comic Con. "It should come as little surprise that I have an affinity for all costumed crimefighters no matter if their adventures are 'period pieces' or not--heroism is heroism regardless of whatever year's on the calendar," said writer Mark Waid. "With this Green Hornet project, which I've been percolating on for more than ten years, I'm able to meld my love of the Hornet's legacy with a little bit of Citizen Kane and a lot of Lawrence of Arabia to tell a story never before told--the dark years of the Hornet's later career and the one mistake he makes that nearly costs him everything." 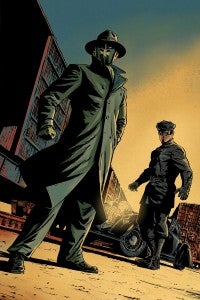 Dynamite launched the character in his own series by filmmaker Kevin Smith, based on his rejected film script for the character. The series turned out to be a best-seller, and has been followed by The Tower Chronicles writer Matt Wagner, who took on a Year One miniseries going into the character's early years. "I wasn't very familiar with The Green Hornet growing up, but I always thought he looked sleek and stylish - I guess I had a soft spot for old-school heroes," said cover artist Paolo Rivera. "I later discovered that he was designed by H. J. Ward, my favorite painter of all time. The more I learned about Ward, the more I learned about Britt Reid and Kato, including Reid's familial ties to The Lone Ranger. I can't wait to render my interpretation of the green team. That, and I miss Mark Waid." The character, who was created in 1936, originally appeared in radio plays. Over the years, he's been featured in novels, feature films and comic books--but arguably the most recognizable incarnation of The Green Hornet is the 1960s TV show, which starred martial arts legend Bruce Lee as Kato.

Green Hornet To Be Relaunched by Mark Waid in 2013

Uncharted: Legacy of Thieves Collection Will Allow Save Transfers From PS4