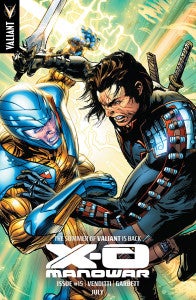 Robert Venditti, who relaunched Valiant Entertainment's X-O Manowar last year and who currently writes Green Lantern for DC Comics, came into the "Summer of Valiant" in 2012 best known for his work on The Surrogates, his creator-owned original graphic novel that was adapted into a film starring Bruce Willis.

He did not, at the time, seem a particularly logical candidate for a mainstream superhero book, and there were those who figured that he would be on X-O for an issue before leaving and going back to his more personal work.

He's gone the other way, though, becoming a key part of the overall plan at Valiant and helping Joshua Dysart, Fred Van Lente and Dwayne Swierczynski "showrun" the first year of Valiant's return.

Venditti sat down with ComicBook.com to discuss the last year, what's next to come for him at Valiant...and how his work ties into a little something called Unity.

ComicBook.com: Is it a little bit odd, going from somebody who's known basically as an indie or creator-owned guy to suddenly being a huge hit as a work-for-hire creator?

Robert Venditti: No, I mean it's actually the reason why I did it. I'm very much about, every time I pick a new project, doing something that I haven't done before. So all the early stuff I did was creator owned and when an opportunity came along to write X-O for Valiant and it was a chance to work on an established property, it was something I wanted to do becuase I wanted to challenge myself in a new way.

And I know there's sort of a big debate in comics about creator owned versus work-for-hire. Work-for-hire stifles creativity or whatever. From my perspective, I think creator-owned is one type of creativity becuase you make it up, you can do whatever you want. But in a work-for-hire scenario, you're doing X-O Manowar or Green Lantern or whatever, they hand you a concept and say "This is a story about a Visigoth warrior who gets kidnapped by aliens and comes back to Earth in a sentient suit of armor"--that's a massive set of constraints they're putting on you, so that's a whole other kind of creativity where you have to be creative inside this set of constraints. There's a whole school of thought in art that constraints actually breed creativity.

So for me I think a balance of creator-owned and working on established property is a nice balance. 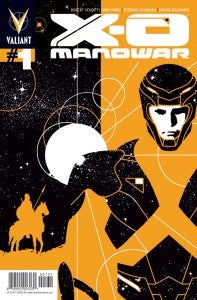 ComicBook.com: I think a lot of people expected it to be more or less, "Okay, well, this is X-O Manowar, GO!" was it you who wanted to really slow it down a little and develop him as a character first?

Venditti: My vision for the series from the get-go was to do something that was more character-focused. In the first issue of the original X-O, you open up on page one and he's already escaping from the alien vessel and you don't really understand what it means to be a Visigoth or any of these kinds of things.

Now, I'm not disparaging the original run. It was obviously great stuff and the high concepts are really great but I think as far as the kind of writing that I want to do, before I can have a reader sympathize with this character and have them understand what it means for them to be so time-displaced, they have to understand the time the character comes from. Warren Simons, the Executive Editor of Valiant, was always very much on board with that approach. It was the same kind of approach that he wanted as well so I think the nice thing about Valiant's books across the line is that they are genre books in one sense or another but they are also mainly character-focused as opposed to being plot-focused. That's part of what makes it such a great universe to work in.

ComicBook.com: X-O...it's almost like your turn at bat is coming back up again, isn't it? I mean, you did Planet Death, but then Harbinger and Bloodshot had their event and now you've got Sect War coming up in Archer & Armstrong. Is there some next, big, crazy thing that you guys have coming up soon?

Venditti: There's always a next, big, crazy thing and very much up through Planet Death, which ended in #14, was kind of like the pitch of the series that I turned into Valiant. This is my first long-form story arc. So now that Planet Death is over, we sat down and we made the next long-form arc. So that's what we're startign with issue #15 and that will probably run another 12 issues or so and that will lead to bigger things. We already know what the third arc will be beyond that as well, which will lead to even bigger things. I know there's a lot of hyperbole in comics and a lot of "This is the arc that changes everything!" or whatever, but it really is an upward trajectory with X-O and I don't know if it's luck or happenstance or what but we just keep coming up with ideas that are bigger than the ideas we already did.

ComicBook.com: There's a natural flow to that, too, isn't it? I mean, even looking at Geoff Johns's Green Lantern run, it wasn't until he laid the foundation that he was able to get really crazy because he had that base to fall back on.

Venditti: For me, I'm always nervous about it. I'll have an idea for what this long-form arc is going to be and then I'll have a moment of panic where I'll be like, "I doin't know what the next one is!" And you just hope you think of it before you get to the end. 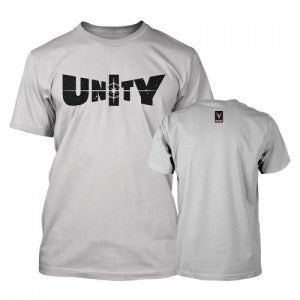 ComicBook.com: Are you working on Unity?

Venditti: Unity has been teased. This image, which is the logo you just saw, is definitely out there. I will say that events that are happening in X-O starting with issue 15, are crucially important not just to the future of X-O but to the future of the whole Valiant Universe. And again, that's not hyperbole; that's actually true.

ComicBook.com: When you started off, there werne't any books. Is it cool to see the way Valiant has come together as a universe this year?

Venditti: I like to kid Josh Dysart, the writer of Harbinger, that I'm the most senior writer of Valiant because I launched the first book but truthfully, that first wave of guys--me, Josh, Duane Swierczynski and Fred Van Lente--we all launched everything together. The fact that X-O was a month earlier than Harbinger doesn't really mean anything. We were all really there from the beginning.

But Valiant's concept and the way it was communicated to me as a writer from the get-go is that we are a cohesive universe and everything is going to try to sync up, but let's get all the books off on their own foot and have their own arcs under their belts before we really start looking at those kinds of things, so we would do certain things where we would try to reference each other's books in ways that if you're reading them all you would get it but Harbinger is completely stand-alone from X-O and they all stand alone and establish all the characters and the conflicts and the backdrop of each series and set up how they're each an individual genre in and of themselves.

I mean, they're all very unique books in the sense that Bloodshot is an action movie and Harbinger is a really good character study and a very team-focused coming-of-age kind of thing. X-O Manowar is very sci-fi and Archer & Armstrong is a comedy so they all each have their own niche but then we all always knew that the long-term goal was for there to be a cohesiveness so it was something that we all kept in the back of our minds that we would just sort of bounce ideas off each other: What would happen if this character from your book interacted with this character from my book? How would that play out? Just bouncing those things off each other.

ComicBook.com: Is there anybody else for you to introduce to the Valiant stage in your book? You haven't really had anybody since Ninjak.

Venditti: Well, I'm definitely fleshing out a lot of supporting cast within X-O as opposed to using an established property that I'm reintroducing like I did with Ninjak. I doin't have anything like that, necessarily, on tap. I am working with Eternal Warrior in this next arc of X-O Manowar but of course he was already introduced pretty well in Archer & Armstrong so he already had a pretty good run and has already been introduced.

But in terms of fleshing out supporting cast, I'm definitely going to be doing that with X-O, now that he's coming back to Earth.