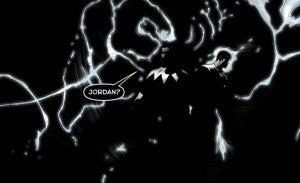 In today's issue of Green Lantern, all eyes are on Simon Baz, the car thief and accidental bomber who was rescued from police custody by a Green Lantern ring and will become the tattooed, gun-toting Green Lantern at the center of the Justice League-Justice League of America conflict during the upcoming Trinity War storyline.

"And for all you Hal/Sinestro fans...read GL #0...and stay tuned!" tweeted Green Lantern writer and DC Entertainment Chief Creative Officer Geoff Johns earlier today. "The story is only getting started!"

But what story is that? We've got a guess.

During the Blackest Night event (which seems to be at least partially still canon), Johns introduced dozens of Black Lanterns--characters who came back from the dead as grotesque parodies of themselves, using information that only the "real" dead person would know but not actually their spirit. Given that it was Black Hand and his Black Lantern ring that seemed to cause the deaths of Sinestro and Hal at the end of the Annual, it looks at first blush as though this limbo the pair find themselves in might be the place those souls ended up while the bodies were reanimated with evil intent.

Green Lantern Hal Jordan: The Story Is Only Getting Started