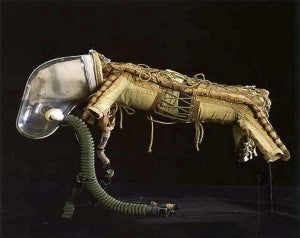 On James Gunn's Twitter feed, plenty of folks have caught a pair of Rocket Raccoon jokes made over the last few weeks. Slightly fewer have commented on the presence of a photo of what looks like a space suit built for a dog.

And whether or not Cosmo (a Russian dog shot into space during the Cold War who runs Knowhere's security in the Guardians of the Galaxy comics with mental powers helping him communicate) will appear in Guardians of the Galaxy--we're guessing not--it's pretty clear that Gunn is having a bit of a laugh with his Twitter followers.

"So @VonSpears & I are going on a little trip. Here's what he's wearing," tweeted the filmmaker, attaching the photo to the comment.

That was about a week ago. Yesterday, Gunn introduced his followers to "My new best pal Omar the raccoon," lending some credence to the idea that perhaps he was researching real-world analogues to the CG characters in his upcoming Marvel film.

Guardians of the Galaxy, directed by James Gunn, will be the first new franchise kicked off by Marvel following the release of The Avengers. It's set to be released in theaters on August 1, 2014.

Guardians of the Galaxy: Cosmo Is Being Teased